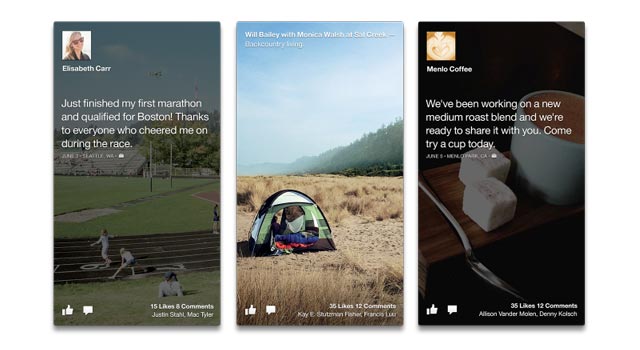 Facebook today launched Facebook Home, a replacement launcher and suite of supporting Facebook applications and services that can transform an Android device into the much-rumoured, oft-mentioned, fabled “Facebook Phone”. There’s a huge number of customization options allowing your Facbeook news feed, chat and notifications to come to your home screen.

The homescreen & lockscreen launcher replacement, “Coverfeed” allows you to see what your friends are doing, post fresh content, comment on others’ posts and “Like” them without having to launch an app. Messaging is prevalent throughout the interface with “Chat heads”, allowing you to interact with your friends via SMS or Facebook Messenger.

Notifications are grouped by person, rather than by app. Facebook hopes to change the way you use your phone, placing priority on social interactions, with apps a secondary interface. They want you to focus on who you’re interacting with, not how you’re doing it.

Facebook Home will be available for USA residents on April the 12th via Google Play. Those of us outside the US have been given a noncommital “shortly after that” — no word yet as to the definition of “shortly after”, but we expect enterprising users will find a way to download the APK file very shortly after the US release.

If nothing else, for those users who are addicted to Facebook it will be a unique and immersive experience. I suspect those of us who only use Facebook out of necessity won’t be interested in making the switch.

You can learn more at Facebook’s Home Site. Further coverage of today’s announcement can be found in the Facebook Newsroom, or you can watch a replay of the event.

Will you make Facebook Home a part of your Android experience? Let us know in the comments!

I pretty much loathe Facebook, the only thing I’m happy about is that Facebook is taking Android seriously now. Other developers should do the same. I’m sick of Android being treated as a second rate system.

Facebook is jumping the shark, it’s a last ditch effort to remain cool. It might have a billion “users” but I promise you that using MySpace would actually gain you more Street cred these days.

Me? No. I don’t Facebook.
My wife is more Facebooky, but she’s also a heavy Gmailer. I dunno. It might work for her.
My kids have pretty much abandoned Facebook. They’ve gone onto the world of Tumblr, WhatsApp and other obscure social thingies. For them Facebook is old hat.

so facebook is now for the new generation of hippies? COOL!

Don’t worry, it’ll still remain popular for years. I can’t believe some jobs actually require you to have Facebook.

I thought my point was that it’s for the current generation of mums.