Home (Legacy - Do not use) Design Acer C7 Chromebook — Review Chrome OS is an evolution of the Chrome web browser and is a strong step towards cloud productivity being a realistic option for the future. Now that the might of Google is behind the push in Australia there’s certainly no end of funding or market penetration available. The question is how much demand is there for a niche product like this and how many people are ready to work entirely from the cloud and/or prepared to move their workflow into the cloud to utilize the Chrome OS?

It’s important to understand what Chrome OS is before looking at purchasing a Chromebook. Chrome OS is a bare-bones operating system that relies on a number of factors to be a functional tool. To make the most of a Chromebook (or, really, to use it at all) you’ll need a mostly permanent internet connection available, a Google account, and a realisation that you may have to change some of your habits.

For example, there’s no Microsoft Office available — though Google Docs is rapidly becoming a good alternative — and your data is not (for the most part) stored locally; it lives in the cloud.

Despite working in IT, the Chromebook generated some interest and a level of intrigue from some of my colleagues.

“So where does it store documents?”

“It’s just a web browser then?”

But after some discussion of the concept, people’s usage of computers and laptops these days and the fact that the vast majority of computing time is spent in a web browser the concept makes sense to people. In the IT circles I deal in, the majority of users prefer to use Google Chrome as their web browser so the transition to Chrome OS is a very simple step to take.

Then you’re ready to use a Chromebook!

It really is as easy as that — username, password, and go! Unless you use 2 stage authentication for your Google account, in which case you’ll have to enter the verification code. If you’re a heavy user of the Google Chrome browser and sync bookmarks, passwords and Chrome extensions from your other devices all you have to do is wait a couple of minutes for Google Sync to run, and your Chromebook has been automatically setup for you just like your existing Chrome setup.

The user interface in Chrome OS is clean, crisp and extremely easy to find what you’re looking for. The one touch navigation makes the Chromebook a very smart choice for low end users who want to do some email (provided it’s Gmail or another web based service).

What can you do on a Chromebook?

I’ve been asked that a lot while writing this review, my answer remains the same… Short of Gaming you’re really only limited by your imagination and the plugins that are available for the Chrome Browser.

The move of many programs and services to the cloud over the last 18 – 24 months has strengthened the position of the Chromebook. Offerings such as Gmail have been cloud based for years, but Google Drive (and the continual additions being made to it), the open API’s available for many services and even the recent addition of Office 365 to the cloud have made the ‘Cloud Move’ a much easier proposition.

Most of your normal workflow that you’d accomplish with locally-based apps can be moved to a Chromebook without too much trouble. For example, web browsing and email are a given, Twitter apps exist, there are (albeit, somewhat basic) photo and image editing options, you can edit videos in Youtube, there’s a Spotify extension available for listening to your tunes, and all your PIM tools (contacts, calendar, to dos) are of course there as well.

There’s not too much missing, but..

Building to a budget requires trade-offs

Lightweight, functional, cloud based services versus outright power, grunt and broad reaching functionality to all users.

Much like the balance that manufacturers play with new mobile phone designs, the more you add the bigger and heavier it gets! Acer and Google have done a very good job building the C7 to a budget and to a very specific market and those are two very important points to remember.

It’s not for hardcore gamers, or anything other than some of the great casual games available in the Chrome store or the web based online games. They provide a great and often welcome distraction from the hustle and bustle of a work day, but personally I don’t need the distraction of games when I am trying to work.

When using the Acer C7 for a period of time I found it got warm enough to notice the Chromebook on my lap, not uncomfortably so, but noticeable that it was generating some heat and causing some extra warmth.

The fact that the device runs nearly silent is the clear trade off for this minor complaint.

Gaming is not what the Acer C7 or any other Chromebook is aimed at.

The reduced battery life for reduced weight and size may be a deal breaker for some users and drive them towards a tablet or even a slightly more expensive, but still low end notebook that offers slightly better battery life.

The Acer C7 does generate a bit of heat when used for more intensive tasks like streaming video or gaming, but this is not unique to this, or other Chromebooks. Most laptops generate a bit of heat when working intensively, and while some dissipate this heat better than others, if you prefer a cooler lap, the Acer C7 might not be your choice. Alternatively, you could use it on a desk or something else so as not to warm your legs…

The main thing to keep in mind when considering a Chromebook is that it does have some limitations.

There really are very limited options for gaming, so if you want to play the latest and greatest 3D games, look elsewhere. Secondly, you really do need to have an internet connection to use a Chromebook. While you can do some tasks offline (if you’ve enabled it) such as offline Mail or offline Docs, this really is quite limited compared to what you can achieve while connected, so if you’re going to use a Chromebook on the go, you really must have a portable hotspot solution available, or you’ll be very limited in what you can do.

Those caveats aside, the Chromebook is a great supplementary device — just in the same way as Netbooks used to be, or that tablets are today — but if you have needs beyond what the Chromebook can cater for, you’re going to need something else around the house.

If you’re already using Gmail, Google Calendar and Google Drive for your document storage and development then I have no hesitation in saying that the Acer C7 could be the next device for you. It’s affordable, a good, portable size and weight and covers most of the average users needs. Make sure you do your research; look at what your needs are, and if they can be met by a Chromebook, then go!

Note: This article was written on and published from the Acer C7 Chromebook, our thanks to Google Australia for the loan unit which enabled Ausdroid to complete this review. 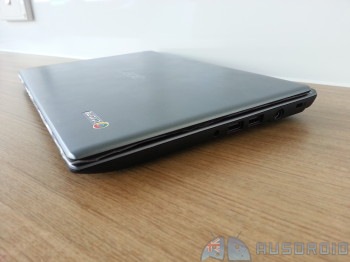 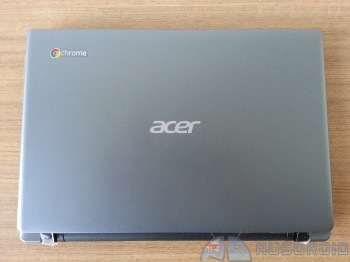 They seem like great laptops but with a lack of an HD display and dual core which seems very outdated by todays laptop standards, I’d definitely give this a miss. Also wish they had some built in offline applications, just media player would be nice. Something like VLC would suffice.

For what they do (basically just browsing), dual core is usually quite fine. I only rarely experience my Samsung Chromebook lagging and it has just an Exynos chip in it. As for offline applications, they seem to have a media player built in which works offline (just tested this as I hadn’t thought of it before you mentioned it).

Thanks for mentioning that, I’ll have to take another look in JB HI FI and test them out some more. They seem interesting but I don’t know if it’d be for me. I do like physical storage, but they do seem ever so fast. And I am on the web 99.98 of the time. I do love watching movies and TV though so I’d probably just get another portable HDD seeing as both my portable drives are fucked.