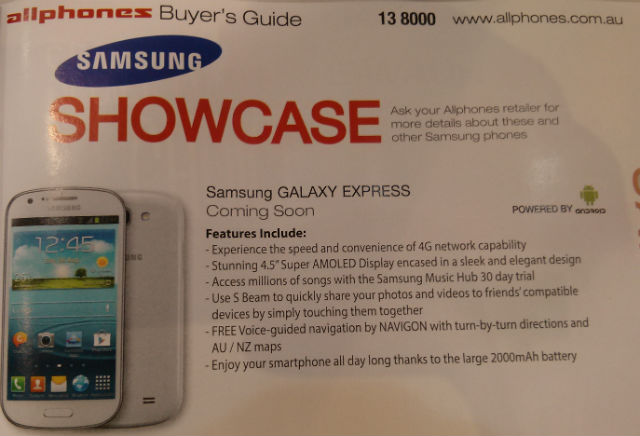 According to the April edition of the AllPhones buyers guide the Samsung Galaxy Express, which was announced in January will be ‘coming soon’ to AllPhones. When asked about exactly when the Galaxy Express would be arriving in-store, staff advised they expected the phone in-stock towards the end of the month.

The Galaxy Express from the looks of the specs was launched by Samsung as an LTE phone aimed at budget conscious consumers, however this has not transferred to the model being shown on the AllPhones website which lists only 3G and GSM frequencies.

We’ll have to wait for the actual launch of the Galaxy Express to see if the 4G functionality is included in the Australian release once AllPhones and Samsung officially launch the phone.

I’m sick of Samsung. Why can’t they just have one low range, one mid range, one dual SIM, and one flagship a year? Also, why do they just recycle the S III design for every new phone they release? It’s getting way too much. They lost me as a customer. I sold my S III the other day and bought a Nexus 4. Probably will never go back to a Samsung again. My reasons: AMOLED is crap (especially PenTile), TouchWiz is crap, bloatware isn’t useful, Eyxnos chips are good but closed source. The only thing I actually liked in my… Read more »

it has nfc, s beam is just what samsung calls nfc.