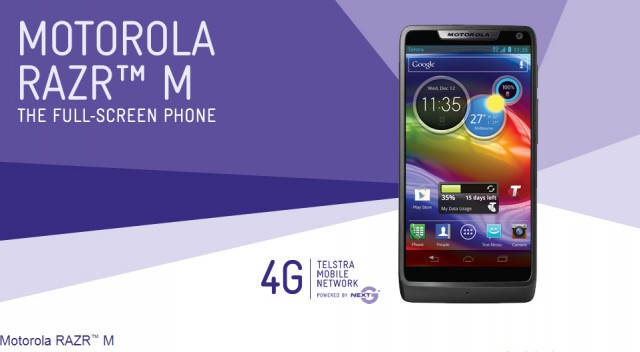 Earlier in the year, perhaps facing increased competition in the mid-range handset market, Motorola announced that it would offer a $100 rebate to those who purchased the Motorola RAZR M through Telstra. This ran from February to 31 March, and I can only imagine it was a somewhat popular promotion.

Because Motorola have told Ausdroid that they’ll be doing this again! From today until 1 July 2013 (or until stocks last) Motorola will be again offering a $100 rebate to those purchasing the Telstra version of the Motorola RAZR M — either outright, or on a plan.

Claiming the rebate is simple. Motorola have set up a simple cashback website, and as long as you claim within ten days of purchase, you’ll receive your rebate (as long as you’re in the first 3000 buyers, of course). Full terms and conditions of the rebate are on Motorola’s site.

Given the time of the year, and the length of time since the RAZR M landed on market in October 2012, it almost sounds like this is a ‘run out’ type promotion, designed to move as many RAZR M units as can be before newer, higher powered competitors hit the market.

The way we see it, it still runs a relatively recent version of Android (4.1.2), it’s lightning fast, and when we reviewed the RAZR M, we quite enjoyed it. This could be enough to push a few people down the RAZR M path.

What do you think? Will you be looking for a RAZR M now, or suggesting one to family, given this new rebate announcement?

I love how you act as though you’re breaking a world exclusive.

The in store flyer (at Telstra) I saw on the weekend said that it started 8th April so you’re only about a week and a half late Ausdroid.

I bought the Razr M about 6 weeks ago and have been really happy with it. Very fast and a good size for those that don’t want a large phone. Also got the cashback cheque from Motorola very promptly. Would recommend.

My dad got the Motorola Atrix, the flagship of the time, and it never ever got pushed to Ice-Cream Sandwich. it was ridiculous. Apparently that phone was meant to get the $100 money back thing too.

It was $100 on a trade-up to a new Motorola phone. And I’m pretty sure it was only available in the U.S.

After the Honeycomb to ICS update debacle with the Motorola Xoom V1, I vowed never again to use Motorola. And I am standing firm. I have just ordered a HTC One from Mobicity. With a bit of luck, there will be no more delays and I’ll get the One sometime within the first week of May (Mobicity have a rather large back order, they tell me).

I’m an Atrix user – you’re lucky you got an update! Our ICS update was cancelled at the last moment last year. But thanks to some hard work from volunteers (and apparently some inside information from Motorola) we will soon have an updated kernel and be able to run Android 4.0+ without big hacks.

As I stated in a comment above, this phone was a flagship, my Dads phone never got an update, and he called Motorola too, or contacted them somehow and no word on updates.

Happens with everyone sans nexus sadly

So how much is it after rebate?