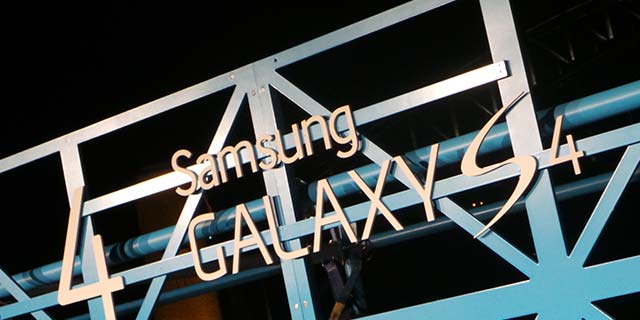 For Samsung, tonight’s Galaxy S 4 launch event seemed as much a show of force as it was a smartphone launch.

While its competitors seem to like to hold device launches at the Museum of Contemporary Art, there’s a certain statement made by launching at the Opera House. It’s the Sydney Opera House. It’s world-famous. Samsung has climbed the ranks of launch event spectacles in the last few years, and they’ve just launched what’s sure to be one of the world’s most popular smartphones in front of one of the world’s most recognisable icons.

If there’s one thing we’ve come to expect from recent Samsung launches, it’s that there’s often something a bit playtful going on, and sometimes a bit bonkers. In the case of tonight’s event, that was mostly outside – the Opera House was decked out with a huge blue carpet, leading guests up the western side towards Sydney Harbour past a few interesting but fun spectacles.

On my way into the event, I passed a couple of girls with some striking multi-coloured hula hoops (especially effective after sun set), a couple of performers doing tricks for passers-by, two people with their heads in square fishtanks, and a human rosebush giving out blue roses. I later overheard some discussions about just how difficult it was to actually find the huge blue carpet and just how many blue roses they actually gave out at the event (I was also chastised for believing them to be plastic – oops!).

Once I’d found my way past the unusually-inquisitive security guard (who gave me the third degree about precisely which event I was there for, while standing in front of a huge “4” sign, and exactly which company I was representing) and signed in, it was a short walk to the marquee on the north side, facing onto Sydney Harbour. 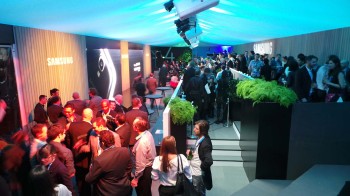 The marquee was decked out with a slightly raised stage, and two raised tiers for media and guests. At either end were additional sections for the bar (some would say, the most important facility of the night) and a demonstration area which was kitted out with Galaxy Note 8 tablets. Some kind of black blocks with Samsung lettering on top were at either end of the stage and in the center of the room. Moving around was a little difficult due to the number of people present, but before long the festivities began and we were asked to take our seats. Well, some of us got to take seats. I stood.

Guy Edmonds took on MC duties for the evening, and while he did a reasonable job of keeping proceedings going, some of the obviously-scripted gags felt awkward and fell flat. I’m sure it was an odd experience for Guy to be MC’ing to a room full of tech journalists, anyway.

Samsung Australia’s Managing Director Seung Ro Yoon told us how Australians have fallen in love with the Galaxy phone range – and he’s right, the number of Galaxy S IIIs (and even S IIs) I see on the train on any given day is quite astonishing. Yoon namechecked a couple of the key features of the S 4 and spoke a bit about Samsung’s partnership with the Opera House.

Tyler McGee, Samsung Australia’s Telecommunications Vice President, joined Edmonds on stage for the remainder of the event to go through and demonstrate some of the features of the device. There wasn’t anything new on the software front over the features seen in the New York launch, although announcement of local content deals for TV Video-on-demand services (July) and a re-announcement of Foxtel Go (June) were notable.

The big reveal we’d all been waiting for came at the end of the presentation – $899, available Saturday April 27. We’ve covered carriers’ pricing elsewhere, and preorders will be starting on Wednesday April 24. 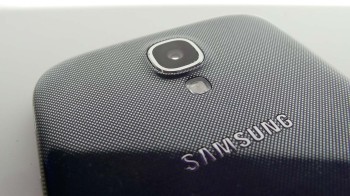 With the presentation over, the ominous black blocks were removed and some fairly standard Samsung demo stations were revealed (the same ones you see in the Samsung Experience store), lined with Galaxy S 4 units tethered to anti-theft devices whose coils had a frustratingly short reach. Fortunately, most of the demo staff were armed with their own devices – one told me she only received it yesterday. 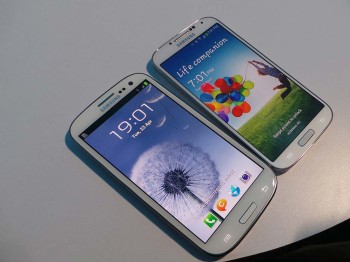 Placed side-by-side with its direct forebearer, it’s obvious that the body of the device hasn’t drastically increased in size over the Galaxy S III, but the bezel around the screen has given way to the 5 inch screen. It feels pretty much like a Samsung device, plastic construction and all. In hand, the device feels surprisingly light – another result of Samsung’s continued insistence on all-plastic construction, and it doesn’t feel particularly remarkable in the same way as the HTC One’s solid metallic body or the Nexus 4’s glass back.

The short reach on the demo units’ coils, combined with the blaring music and low lighting meant the demo stations didn’t really lend themselves to much more than a casual poke and prod of the device – we’ll have a full review of the device as soon as we can. It seems I wasn’t alone in feeling this way – the demo stations were relatively quickly abandoned in preference for the food and beverages 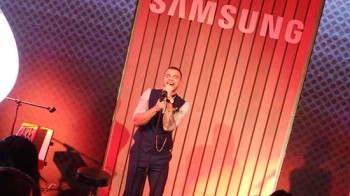 The crowd had started to thin out a bit by the time Guy Sebastian took the stage. While his performance did manage to attract a decent number of onlookers (many of whom seemed to be holding Galaxy S 4’s), he only stayed around for a couple of songs — his departure signaled the end of the evening for many, including myself.

Thanks @trevorlong for the loan of a Galaxy Camera for our event coverage.

Will you be buying a Galaxy S 4 when it goes on sale on Saturday? Let us know in the comments!

So no noticeable difference between the two screens then? Does the extra ppi and resolution actually give a wow factor?

The Samsung hold ups on my SG Note 2 software updates for nearly 2 months may force me to ditch it. Vodafone approved them 2 months ago but Samsung has sat on them. Maybe its a ploy to upsell by Samsung.
By the way has anyone else notice that the pen tip on Sam Note tablet is better than the slippery Sam note phone? The tablet pen with replaceable nibs is heaps better.

Hehe, the typo is still in the URL.

I know. Can’t fix the URL it everyone’s twitter links break. Oh well. The post time should give an indication if how it happened.