I remember it fondly.  It was 2010 and I was sitting in a seminar when I received an email from a friend regarding the innovative keyboard, Swype.  At this time Swype was installed on phones by manufacturers (Samsung Galaxy S was one of the first) but was unavailable to purchase or use by those not using these phones. Swype were finally opening its doors to the public in the form of a public beta.  Within 2 minutes I was signed up to said beta program.  I started using Swype and like many others fell in love with it.  Problem was that the beta eventually closed, locking a lot of users out.

For many people in the days of smaller screens where tap/touch typing and auto correction were not what they are now Swype was a godsend to many people.  For some though, along with this closed beta program the effort of first installing an install app, then entering passwords etc on the Swype site to download the app I eventually gave up on it as did many others.  All this extra effort was just not worth it for us.

Then along came other keyboards that use the swiping functions to type- TouchPal, Kii, Swiftkey, SlideIT, AOSP jellybean keyboard- and it appeared to many that Swype had been left behind and their business model of selling to manufacturers only may not have been in their best interest.

Fast forward three years to today and Swype’s new owners, Nuance (of the Dragon Naturally Speaking fame) have decided to share with everyone the keyboard that was once considered the best keyboard available on the Google Play Store.  The introductory price is 99cents which is extremely cheap for a keyboard so it seems that Nuance are trying to win some users back.  I have paid for many keyboards- Smartkeyboard, Swiftkey, Kii, SlideIT, plus others whose relevance has long since passed by the wayside- and every single one of them cost several times this.  There is also a free trial available which will give you a fully functional Swype keyboard for 30days.

There appears to be several new functions to the keyboard since I used it last including a split keyboard, next word prediction (ala Swiftkey), and themes.  Interestingly, the description on the Play store mentions tablet functionality but it wouldn’t let me install it onto my Nexus 7.  Maybe this is just an oversight on their behalf? 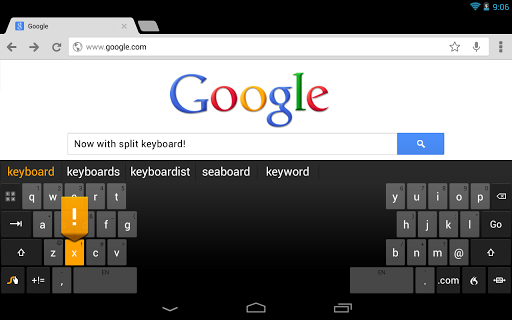 While it’s great to finally see Swype available to the general public the question is though, is it too late for Nuance to cash in on Swype which was at one time heralded as the most innovative keyboard for Android?  Have the swiping functions of other keyboards surpassed the functionality of Swype which was once king in said domain?

Have you used Swype in the past?  Are you still using it?  Will you be buying the new version on the Play store?  What keyboard is it replacing?

I got sick of having different keyboards on phone and tablet, so I switched to SwiftKey Flow. Probably worth seeing what Swype have done in the meantime.

Love Swype. Such a monumental leap forward in texting. Were they the first? I was always surprised it wasn’t patented or protected somehow but it’s probably not possible.

Tried Swiftkey Flow too but always end up back on Swype because of the keyboard shortcuts. If only someone would combine the best of all of them.

Too little too late. They’ve already been surpassed by others who have been available in the market for years.

They’ll rise again. Everyone knows Swype. Most people I speak to about those types of keyboards refer to them as Swype. Even if it’s Swiftkey or something.

If they closed the beta it wasn’t for very long, I’ve been using Swype for years, legally. I tried swiftkey flow for about a month earlier this year, and IMO it just wasn’t up to the task. Swype always knows which word I want to type even when I swipe it badly. Swiftkey I will use for a tablet, but Swype is the best for phones (1 handed typing).

Always found Swype to be the best one thumb keyboard. It’s focus on backtracking corrections and shortcuts has made me pay the buck to get it again. I’m not disappointed either.

Did they really close the beta? I used it for ages with no issues, up until late 2012… It’s a great keyboard imho, but now that similar functionality is built into Android 4.2, i think they’ll struggle to make much headway. I still use official Swype on my Razr HD, but I’m happy enough with the stock keyboard on my nexus 7…

It’ll be open beta forever. I read it on the website.

they changed their swyping algorithm thingie a few versions back which resulted in absolutely crazy words being inserted when you wanted something else (“vy53QRxpH” instead of “Hey”, for example), so I always stuck with an older version. I swapped to Swiftkey Flow when that came out and haven’t looked back since.