A new phone manufactured by Huawei, known only by the identifier ‘P6-U06’ has made an appearance before the Telecommunication Equipment Certification Centre, the Chinese version of America’s FCC, which French blog NowhereElse are tipping as the Ascend P6.

According to its specifications, the P6-U06 is said to be the world’s thinnest smartphone, at only 6.18mm thick. It will have a 4.7-inch 1280×720 TFT display, a 1.5GHz quad-core processor, 2GB RAM, 5 megapixel camera and 32GB of internal storage. It also appears that the device will have support for dual sims, a feature usually reserved for the Asian market, so it’s unlikely that we’ll see this exact model in Australia any time soon. 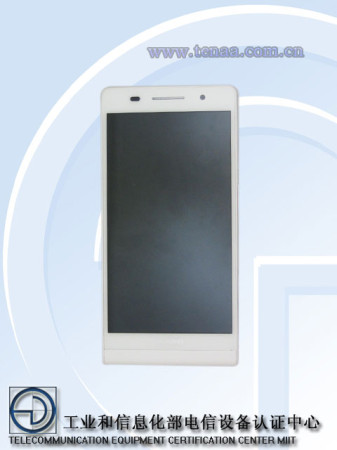 Why do manufacturers think we care about this? Shaving fractions of millimeters off a phone is just another pointless statistic they can throw on a spec sheet so they can advertise it as ‘thinnest ever.’ It’s not making the phone any more comfortable (sometimes quite the opposite) and they’re blowing a weight quota that could have been used for a bigger battery.

Good on them for making it so thin, but I’m sick of this “thinner is better” attitude that seems to have come from Apple and everyone decided to follow.

Yep. Thin was important – when phones didn’t have function… People wanted them small because they were just a device for calling or SMS so why have anything more bulky than it needed to be? Especially with such Small screen sizes. I think things have changed – people are using them for reading and media consumption… They are once again becoming bigger. Sure there are still use cases for small devices… But I now focus more on % screen utilization. I want the biggest phone I can carry in my pocket now…

Haha yeah battery life technology seems to have come to a halt. We need something better then lithium-ion. For now we have to deal with technology getting lower and lower powered. I’m fine with that. It all helps.

What ever happened to Toshiba’s regenerating battery ? They had a theory of using Hydrogen in a battery. The gas would dissolve into water which would then regenerate the battery. Or something like that. It was supposed to be the “wow” break through in portable battery. But it seems to have disappeared off the face of the Earth. Pity, theory was good.

In the last 12-24 months I’ve seen so many supposed advances in battery technology that we should all be on a year long charge with 100% screen on time by now. Unfortunately nothing has ever materialised, it’s a real shame.

It is a shame, because while everything else advances, batteries seem to be going nowhere. I’m just happy manufacturers are focusing on low powered hardware, which is always going to help battery life.