Services for Google Glass also known as Glassware – a term coined by the Google Developers behind the Glass project – are starting to appear beginning with the New York Times and it appears that Twitter is also keen to get in on the hype surrounding the exciting new product. 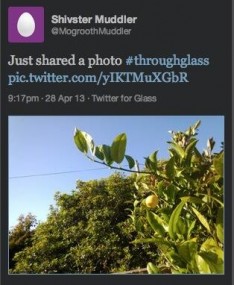 This is not an isolated incident with Googlers Steve Lee, a Director at Google X who tweets via @moneyball and Sidney Chang a Business Developer for Google Glass, who tweets from @ballersid both sharing tweets that are tagged with ‘Twitter for Glass’ as the application used.

Twitter is highly protective of their name, early on forcing third party apps such as ‘Touiter’ to change their name to something that doesn’t even resemble the word Twitter and hence we have ‘Plume’, so it’s highly unlikely that a third party developer especially one working with Google would be using this name for their app and we’ve seen over the last year that Twitter is very keen to control access to the Twitter stream and is restricting new third party apps from using over 100,000 tokens and this is probably their attempt to jump into the space before other developers can do the same.

With an official ‘No Comment’ given to AllThingsD, it’s nowhere near official yet but it would be no surprise to see Twitter used on Glass and it’s great to see that Google is encouraging an open use of Glass and not restricting access to their own services like Google+.

Who would have thought the futurama eyephone episode was just predicting the future.?

Damn, totally using that image for a future Glass post. Thanks Brian.