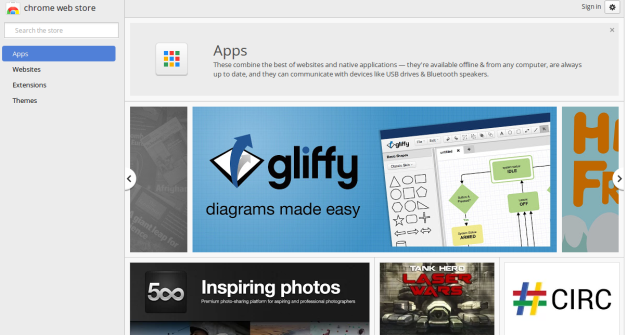 If you’ve used ChromeOS then you know that occasionally rather than an extension a packaged App which can run offline is made available, but unless you had a direct link to it you couldn’t really discover it. Today, Google has announced that they are making a Packaged Apps section available in the Chrome Web Store. The catch is that you will only see the new Apps section if you are running the ‘Developer channel’ on your Chrome browser in Windows or in ChromeOS.

The description of packaged apps from the Chrome Apps Section reads :

These combine the best of websites and native applications – they’re available offline & from any computer, are always up to date and they can communicate with devices like USB drives & Bluetooth speakers.

This is really at a testing phase for developer to check their packaged apps and to garner feedback as users install them. There are a number of packaged apps already populated in the packaged apps section for you to play with, you can check apps like Any.Do or Text or if you’re wanting to relax, some games like Cut the Rope or Happy Friday. There are some apps that are not available offline like CIRC but as they generally need an internet connection to work this is completely understandable.

For existing hosted apps and legacy packaged apps, the Chrome Webstore now has a new category called Websites which they are now stored in.

This is a big move towards functionality, with nearly 40 sessions scheduled for the Chrome and Apps developer track at this years Google IO including such topics as ‘Upgrading to a Chrome Packaged App’ this is sure to be something that Google will be concentrating on. It’s going to be really interesting watching this feature roll out to the beta and stable channels.