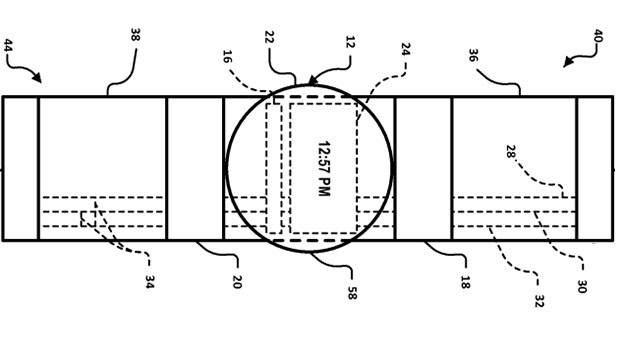 Last month the rumour of Google working on a Smart Watch surfaced thanks to a Financial Times report, today a new patent application has shown up at the US Patent and Trademark Office(USPTO).

The new application which shows a single screen with dual touchpads located on the writstbands either side of the watch face, departs from the previous application filed back in 2011 which showed a flip screen. From the Patent application the touchpads will provide tactile interaction between a user and the smart-watch and controls or gestures listed in the application could include ‘a pinch function, a stretch function and a tap up or down function’.

There is no mention in the patent application regarding what software the Watch will run, although the previous report did indicate that the Android team at Google had been tasked with developing the new ‘wearable’ device.

With a number of tech companies – Samsung, Apple, Microsoft and LG – working on their own Smart Watches the first to market could capitalise on the notoriety, especially if it includes an intuitive and well thought out interface. With a patent filing coming this close to Google IO, perhaps we may see a physical product in 2 weeks.