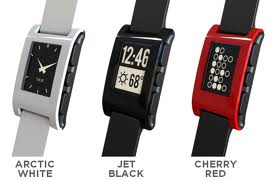 Since the release of the Pebble smart watch and their open API model, devs have been working very hard to make the Pebble watch as useful to as many people as possible. Now with some further tweaks and development the SDK will soon allow apps to communicate back to the linked mobile device and utilize the GPS and data storage. At least for the Android version of the app, those on that other mobile OS will have to wait for this functionality to become available.

Much like the open nature of the Google Glass devices, this feature creates a world of opportunity for developers with some creativity and imagination to create all sorts of useful and impressive apps with the Pebble.

What’s your bright idea for a two way communicating app with the pebble? Let us know your thoughts in the comments below

Sigh.. Still waiting on mine…

I’m still waiting for mine to come – really should have just got a black one. I can’t wait to start developing for it. I guess the wait is OK, by the time I have mine, most planned features should be available.

“those on that OTHER mobile OS will have to wait for this functionality to become available”. Good work.