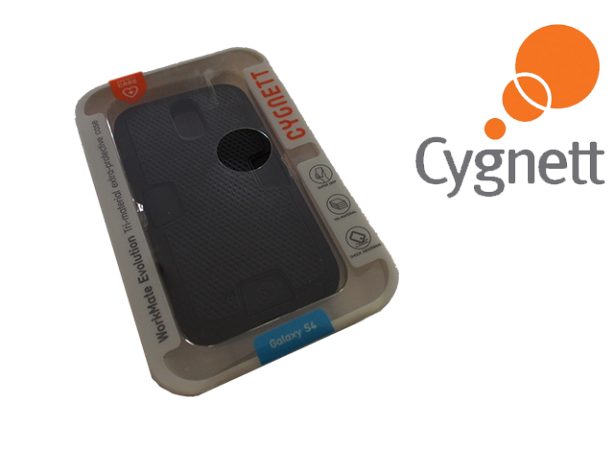 Now that some of the team have received their Samsung Galaxy S 4‘s from various sources, it’s time that we have a play with some of these cases we’ve received from Cygnett. As we found out the hard way yesterday, the Galaxy S 4 is not exactly the hardiest of phones — Buzz managed to smash the screen on his following an accidental fall of no more than a foot from his lap to the floor. Devastating news.

I had a near miss this morning as well — funnily enough, while shooting the photos for this mini review — and had it not been for the fact that I’d left the Cygnett WorkMate Evolution case on my handset, I have no doubt the damage would have been severe. You see, the Galaxy S 4 has a nice glass screen, and I have a nice, cold and hard tile floor. You can see where this would have ended up.

The WorkMate Evolution is a beast of a case. It takes the svelte Galaxy S 4 and increases its thickness to a bit over a centimetre, adding a nice thickness of padding to both the front and rear of the handset. As you can see in the product photos, there’s a nice rim around the screen meaning that unless you somehow drop it on a very uneven surface, the Galaxy S 4 will likely survive a face-down fall on just about anything.

Being somewhat brave, I’ve tested the durability of the WorkMate Evolution (and it’s protective impact on the Galaxy S 4) on a number of common surfaces around the place, including carpet floors, tile floors, brickwork, roads, concrete and even a simulated throw in anger against a wall. None of these have actually managed to damage the phone while so encased. I have no doubt that had I tried these feats of stupidity without such a chunky case, my phone would have been destroyed by now.

If you’re working in environments where destruction might occur, then you owe it to yourself, and your wallet, to invest in this kind of protection for your Galaxy S 4 — they’re expensive hardware, and a little too easy to break if you aren’t careful. This kind of case would be great for anyone that’s out and about, working outdoors, or for editors of online news services.

As you can see in this video (which we’ve posted before, but it’s here again), this case can withstand a 3 metre fall from a scissor lift onto concrete. Given my experience with this case first hand, while I wouldn’t test this myself, I’d say this video is entirely plausible.

The only downside is the inherent size that comes with a case that offers this kind of protection — it changes an otherwise slim and quite pocketable handset into a much chunkier affair, meaning that while it still sits in your pocket, I wouldn’t exactly describe it as innocuous. For this kind of protection, you have to expect that this is going to be the result.

For that little inconvenience, you’re going to have peace of mind that you won’t easily smash your phone, even if you try.

Cygnett’s WorkMate Evolution case is available in black, grey, orange and bright blue for a recommended retail price of $34.95, though you may find it for less through Cygnett’s authorised retailers.

Hi, Where can this case be found in melbourne if you have any idea, have checked with the big telcos and jbhifi but no one stocks it?

hum seems like a good protective case to have to put on during certain activities, any opinions on this case against the likes of the otterbox commuter or defender?

Damn, if Buzz has done this review he won’t have the problem with the Galaxy 4 that he has now – lol.