Google’s own answer to SoundHound and Shazam, as well as the many other song identifying apps available on the Play store, has finally come to Australia. Sound Search in both Google Now and Widget form is now functioning within this beautiful country of ours.

Right at this moment, it appears that the service is rolling out. When attempting to install the widget initially gave me this result: 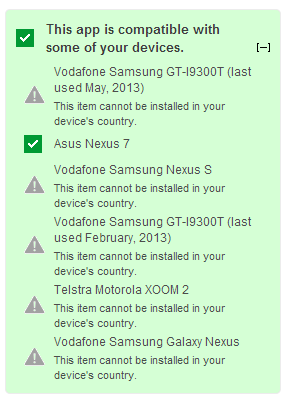 A quick refresh of the page and now I’m able to install via both the web and play store interface on my mobile devices.

While using the voice command “What’s this song?” in Google Now should yield the same result, ie. a search and identification of the song that’s playing, for some Aussies it’s giving a successful result, but for others it’s coming back with “Action not supported in your country”. What does this mean? It means be patient, it’s coming!

Availability aside, it’s very impressive. Like anything that’s got the Google collective behind it, they’ve done a great job. The power to search and identify a song within a few seconds is amazing and here’s the kicker, the widget not only identifies the song for you but it gives you a link to Play Music to buy the song (assuming its available there).

Another step from Google that’s quite frankly, smart business sense. If someone’s searching for a song, they probably don’t own it and likley are enjoying it: Why not identify it and sell it to them using your own music service?

Do you use one of the other music identification apps? Will you give Sound Search a go? Let us know your thoughts in the comments below

No dice with the One.

Pfft…not compatible with the HTC One :/

Pfft…not compatible with the HTC One :/

I found two Sound Search widgets :
This one installs on the Nexus 7, Nexus 4 fine :
https://play.google.com/store/apps/details?id=com.google.android.ears&hl=us

But this one does not :
https://play.google.com/store/apps/details?id=com.google.android.ears&hl=en

Seems to be hit and miss for people, some people saying it’s working and some not, personally I believe they’re opening access, possibly linked to IO this week?

Play store says not available in your country, Australia. How did you guys install it?

I’ve got the widget which works fine but the voice command in Google Now still says that the action is not supported in Australia.

Mine was working yesterday, but not today. Very bizarre, methinks it may roll out further.

Widget works great (has been for a while now – though I installed it from XDA a while ago), Google Now command gets the Action Not Supported as mentioned in the article.

Fantastic, I’ve missed this since a factory reset in Aus removed it from my phone.

Been on Shazam ∞ since I bought it in the 10¢ sale. Been great, I’ll try this out though.

Same! That was a good sale

Don’t you mean SoundHoud ∞? 😛
What ever the case, it has been dodgy lately on my phone, not being able to pick up popular songs. Had a few goes with this Sound Search widget and it works flawlessly. Even with songs you can’t purchase on the Play Store.