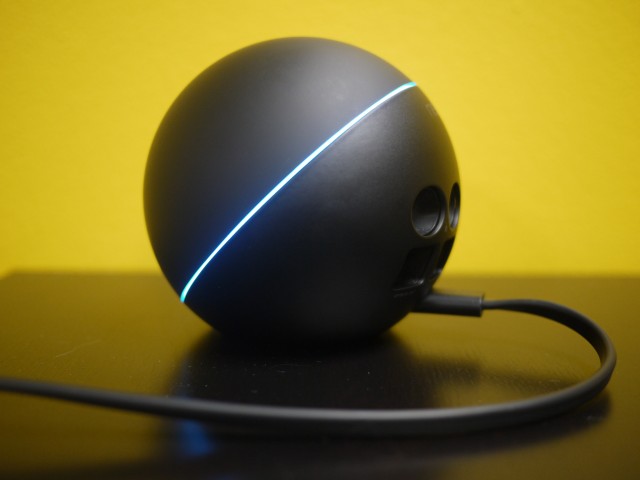 At Google’s I/O developer conference in 2012, Google unveiled an unlikely Nexus product, the Nexus Q. The Nexus Q was an Android powered media player, and while it was supposedly going to see a release shortly after I/O last year, it never happened. A month after I/O, Google announced that the launch of the Q wouldn’t go ahead.

This didn’t stop our Dan Tyson from ordering one via eBay and having a play with it, but thus far, it has remained a niche product, because hardly anyone could get their hands on it.

There has been some speculation the Nexus Q might be revisited at this year’s I/O, due to kick off Wednesday in San Francisco. However, it seems that this is not to be — sources familiar with the proceedings for I/O have said there’ll be no news on the Nexus Q this year, and that may well be the end of it.

The Nexus Q was undoubtedly an example of beautiful design — a matte-black sphere with a thin strip of LEDs around its middle which alternated in colour when interacting with other Androids. In other words, it’s something that wouldn’t look at all out of place in your entertainment unit, but sadly, you won’t be getting one to try this out.

Feature-wise, the Nexus Q was little more than a portal to Google’s Play Store content, allowing users to stream movies, music and more straight to their television. With the addition of an Android smartphone or tablet, users could share their content to their television as well, but it seems that this was where the features seemed to run out. The Nexus Q just doesn’t compete on the same platform as other, established, smart devices like the Apple TV, Xbox, PS3 or other online entertainment units that can already access a world of content, besides doing plenty of other things that the Nexus Q couldn’t.

It was this concern that led to Google suspending the Nexus Q last year, citing “initial feedback from users that they want Nexus Q to do even more than it does today,” according to the company’s statement last July. Google said at the time that it was “postponing” the consumer launch rather than halting product development completely, in order to “work on making it even better.”

Sadly, I think the Nexus Q is lining up to be forgotten about and overtaken by other developments. What are your thoughts? Is this a product that would have appealed to you anyway? Or is it just an object of geek lust, that really isn’t too useful to consumers generally?

I hope Google has learned the lesson. Don’t release half baked products.

Would have loved one – if it had Google TV. They did the right thing by suspending it though; having two product lines that do very similar things is very un-google.

I would love to have one of these. On several occasions I’ve come very close to purchasing one through eBay, and now with Play Music working here in Aus, just another way to have content available @ home. I was waiting to see if it resurfaced at IO13, but looks like I’ll have to look back to ebay once more or look at building a basic HTPC or Chromebox-like unit.