Norton Mobile Security promises a lot on the packet; so many features that it concerned me how it could achieve this without impacting system performance and battery life. The Lite version of Norton Mobile Security is free and packs a decent set of features. The Pro version will set you back a $29.99 annual subscription for some additional features. The subscription can be shared across multiple Android phones and tablets,which goes some way to justifying the cost.

To be honest, I’ve never seen the need for anti-virus/malware apps on Android, however, malware on Android does receive some media attention, so Norton is meeting that demand. However Norton Mobile Security is more than just an anti-virus app. 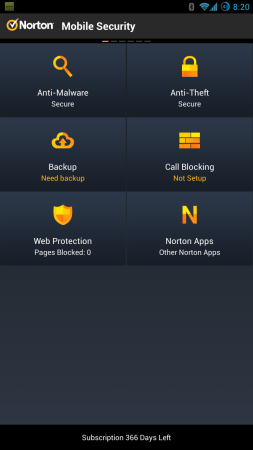 The app interface is well set out and easy to use with 6 options presented on the main screen. The user can choose to navigate using the main screen or by swiping through cards. The options correspond to the main features of the app:

Conducts a scan of the apps installed on the device to identify potential threats. The scan itself took less than 1 minute and can be set to run on a daily, weekly or monthly schedule. Optionally the scan can include the SD card, although this affects scan time and device performance by increasing the scan time to around 5 minutes. From what I can see the standard scan analyses /data and /system while including the SD card will also scan the media partition of the internal SD and the external SD card if you have one. Time taken to scan is not really an issue if it can be scheduled to run overnight when you’re not using your phone.

After installing the app, Norton’s first action was to conduct a system scan of the 121 apps I have installed and it identified BatteryDash, a Dashclock extension, as a threat. Unusual since I installed this from Google Play not a third-party source. It was identified because its permissions suggested it had the potential to display ads, place ads in the notification bar, modify bookmarks and other nasty actions. Not that BatteryDash has done any of these things, but Norton considers it a potential threat and gives me the option to Trust or Uninstall. My Note II is rooted and running a custom rom, but this didn’t seem to interfere with the operation of the app at all.

By accessing the Norton web portal or sending the phone an SMS the user can lock the device or locate the device on a map via GPS. Once locked, a PIN generated by the web portal is required to unlock and use the device again. The GPS locate feature worked very well and pinpointed the location of my device within 50 metres. The Pro version will additionally allow the user to activate an alarm to locate the device if its missing somewhere close by, activate the camera and upload the photos to the web portal, or remote wipe the device. Other apps such as ‘Where’s My Droid‘ will achieve the same result at a much cheaper one-off price, but here you are paying extra for Norton’s reputation, support and impressively user-friendly interface. The web portal is very easy to use even for the novice user, as opposed to apps such as Where’s My Droid and Cerberus which are just as effective but more difficult to use.

Backup is only available on the Pro version and will backup and restore your contacts with the option to conduct a scheduled backup. I’m not convinced this is really necessary since contacts should be synced to the user’s Google Account by default which achieves the exact same result. Unfortunately it only has the ability to backup contacts, Norton could have added the option to backup SMS, photos and some application data to be really useful.

This is another Pro feature where the user can create a custom block list by manually entering numbers or selecting numbers from the contacts or call log, or choose to block all unknown numbers. Many free apps on Play will block unwanted calls and SMS.

Web protection, Pro version only, automatically blocks fraudulent sites while you surf. A site can be manually unblocked for 30 minutes if the user thinks it is safe.

Norton Mobile Security packages some useful security features into an easy to use application. For most people there will be no need to upgrade to Pro, but ultimately Norton aren’t targeting Norton Mobile Security Pro to you or I, they are selling it to our less tech savvy friends and relatives who don’t have the confidence or internet common sense to keep their devices safe. The sum of these features can be achieved for a lot less through paid or low-cost apps, but Norton aren’t just selling the features, they are selling peace of mind from a trusted and recognised brand. While Norton Mobile Security may not be installed on your device, consider recommending it to that neighbour or relative whose device you are constantly fixing, it may end up saving you a lot of time and frustration in the long run.

Nice review, but I really don’t see the need for these apps on my phone/tablet? Especially if you are careful about what you install from where and what sites you browse.

I don’t even install a virus scanner on my desktop anymore!

Has anyone actually ever found any malware/viruses after installing a security app?

I don’t supposed you’ve been able to compare it with Lookout? They’ve been around for ages and it would be interesting to see how the two are side by side.

You mention battery life and system performance at the beginning, but then don’t comment on how the app affects it? Did you manage to benchmark this?
Thanks

I’ve been running it for 5 days now and i haven’t noticed any impact on battery life. System impact depends how you use it – if you run the scan daily and install a lot of apps and have the scheduled backup running daily then you are likely to see some impact. But ‘average’ usage is unlikely to have a significant impact.

Good to know that you don’t have viruses on your phone Matt. Was there any impact on system performance using the Lite or Pro version?

I am using the Pro version and haven’t noticed any impact. However I am running on a Note II which has excellent battery life as it is. On a lower level phone like the Telstra Uno the impact may be more noticeable

Interesting question, because I originally installed it with the intention of uninstalling straight after the review. I’m likely to keep it mainly for the anti theft features, I still don’t see malware as a big issue for Android just yet, especially with the security features built into 4.2.

Are you able to uninstall. Had PC Norton some time back and it would never let me completely uninstall.

It’s different to the Pc version, this one doesn’t have its tentacles in every aspect of the system and it doesn’t constantly notify and bug the user either. Even after a week I’m still liking it. I’m looking at Trend Micro soon, looking forward to the comparison

The backup/cloud option and theft security is pretty awesome. 🙂 if you have a BYOD for work and they add this to your work apps, can be good for insurance purposes. Seems overkill for $30

Oh how I wish we had BYOD for work.. The features in the free version are plenty for most users, personally I don’t see $30 worth of value in the upgrade. However if it’s a work device and installed by default then you’re probably not paying for it anyway

Avast is perfect and free why we pay on this?