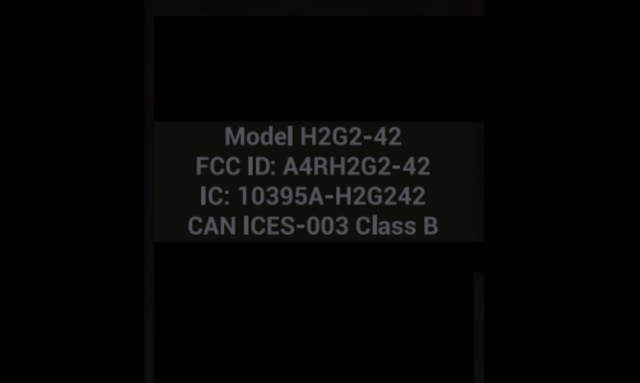 The FCC Test Report description states that ‘The Device functions as a media player’ and was tested on a Dell 24″ monitor. Specs for the device merely include Wi-Fi 802.11 b/g/n and little else, although it has yet to reach the Wi-Fi Alliance for certification yet.

The Product, currently named ‘H840’ is filed under the model number H2G2-42, is manufactured by Singaporean based OEM Flextronics International who have been a manufacturer for Microsoft, producing the Zune media player as well as the Xbox and Xbox 360 consoles, as well as producing LCD TVs for LG Electronics.

With an expanded catalogue of Movie, TV and Music offerings through Google Play, Google is certainly well poised to make an assault on the living room. However they will need to deliver a product that can compete with the current functionality and pricing of current market devices, something at which they failed at abysmally with the Nexus Q. Similarly, GoogleTV, which has so far been produced only by third party manufacturers has still failed to take off and this new product may be Google’s attempt to re-invigorate their lounge room business.

What would a Google branded media streamer need to offer in order to sell well?

Personally, I would love to see an Android based competitor to iPod Touch of exceptional quality. Must have exceptional sound. Doesn’t have to be very cheap. With the Nexus Q, I fear the boat has sailed as many people, Androiders included, may have already invested in Apple TV. But iPod Touch’s do sell well and there may be an opportunity to knock another Apple product off its perch.

If I can control it using my Android device. I’m ready to buy it straight away.