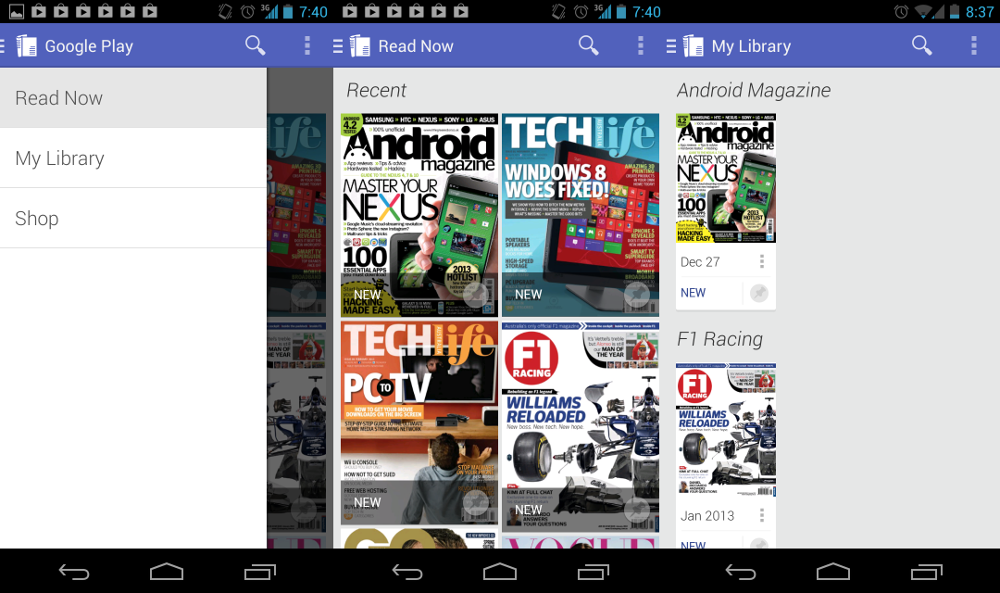 Quite a few of the ‘Best of Google’ apps have seen some pretty nice updates over the last few days bringing the new user interface that Google are promoting which includes the new Navigation drawer. Today Google Play Magazines joined the club and I for one like the new look.

The new user interface only affects the Library interface so you will not notice any differences once you open a magazine and start reading.

Although Google have stated that this is a completely redone UI, if you have seen the new layout for other apps, such as Google Play Music and Google Play Books, you will know what to expect.

One thing that I really like is the ‘My Library’ section which now groups your magazines by the title, so if you have an annual subscription all of those issues will be grouped together.

Does anyone subscribe to magazines from Play? What about in real life? 😉 Just curious.

I have dozens of magazines. Most of them are cheap as (between 80c to $2.50) amd the convenience is great (you can read them on any of your devices, including directly on the google play website)

American magazines on the store are cheap as. I got mens health US yearly subscription for $20. Well worth it, and handy to have something to read when im stuck somewhere.

Really makes me want a 1080p screen on my note2 as some of the text is a bit pixelated when you have it too small.