Shortly after the announcement that Astrid was acquired by Yahoo, the kids at 6Wunderkinder released their Wunderlist To-do & Task List app for Android mobiles and tablets.

Since it’s inception in 2011, there’s been the odd iteration of the app for Android, but following the launch of Wunderlist 2 in December last year, they’ve broken out with a completely redesigned and reengineered UI, which is now identical across platforms.

Wunderlist is a free to-do and task list service which can be used via the Wunderlist web client, or apps for Android, iPhone, iPad, Windows or Mac with extensions for Safari, Firefox, Chrome and Gmail. The app itself is free, but users can upgrade to the Wunderlist Pro service for US$4.99 to use additional features, such as task delegation, list sharing and a file attachment function coming soon.

The app itself has all the functionality of the web client. Tasks can be created and set a due date and reminder alert which is displayed in the notification drawer (or some lock screens, it seems). For extra panicky emphasis, users can star tasks, and once the storm is over, check them off as completed. For the total list freaks, sub-tasks can be added and checked off in the same way. Tasks can be grouped into user assigned categories, and smart lists show tasks due today, this week and those that are starred. Category lists can be sorted alphabetically or by due date, and if you’re a Pro subscriber, by assignee. For those used to Outlook drag-and-drop style tasks, fear not! Forward your emails to [email protected] (via the email account you signed up with) and the tasks will appear in your Inbox list. Ooh, the wunders of the interwebs!

The widget is as aesthetically pleasing as the app itself (being a list freak AND a designer, this thrills me much!). It allows for quick list switching, task checking and starring, but for anything more complicated, one needs to open the task by tapping on it, or the app itself by tapping the widgets title bar.

The Wunderlist app is available now on Google Play for all Android devices running Froyo (2.2) and above. 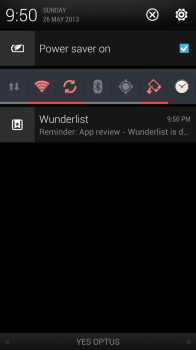 Thanks so much for the review Michaela!

Just a little Wunderlist tip: In addition to Mail to Wunderlist (the [email protected] forwarding feature), you can also get that to work directly from Gmail, Outlook and Yahoo Mail web apps with the Add to Wunderlist browser extension. It’s available for Chrome, Firefox and Safari too.

I don’t use Outlook web app, but I did just notice the Add to Wunderlist button on Amazon, Etsy, Ebay, ASOS… oh my! I better hide my credit card! Thanks for the tip, Simon!

Just tried Wunderlist after reading this review. Thanks @michaelaoleary:disqus. Finally I have found a replacement for the outdated (but functional) gTasks. It is the cross platform support that makes it a must have.

Brilliant, right! Glad I could help 🙂

Nice little review. I’m always interested in productive apps for work purpose. It’s a good counter point for those who insist that Android mobiles are not for business.

Definitely! Glad you enjoyed it 🙂

yeah, I love this app.

Ditto! I’ve been using the web client for work over the last few months. Now that I can set the widget to only show my selected “Personal” list at a glance, I’ll use it for everything!