Home Mobiles Android OS and Updates List of HTC Devices to get Android 4.3 surfaces – before it’s...

Without even being announced by Google officially a list has appeared of HTC devices that will or won’t be getting Android 4.3 and a possible timeline as well. The updates don’t appear to be slated for immediate update but could be arriving on most of their high end hardware relatively shortly. 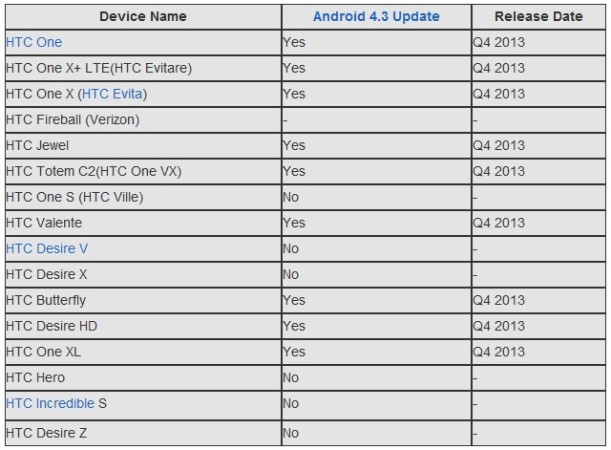 As you can see from the list, the HTC One would be their highest priority and last years flagship devices – the HTC One X and One XL – are of course the next highest on the list; with all devices listed to receive the 4.3 update listing Q4 2013 as the likely date for the update to arrive.

Lower end phones such as the One s, Hero, Incredible S and Desire series are all off the list of candidates to receive the update.

This list is far from an official announcement, with the most suspect part is a promised upgrade to 4.3 for the Desire HD listed. The Desire HD has not even received an official update to Ice Cream Sandwich at this time, with HTC famously announcing the update and then pulling it a week later.

It would be nice to think that the list is real, however it feels like a work of fiction to me. What do you think?

An update to the old Desire HD? I’m going to have to search around for my old one if that’s true. It was a brilliant phone at the time.

no its a load of crap, this is probably a chart someone made on a program

Well this is a surprise. Desire HD getting 4.3 even though it missed out on 4.0, while Incredible S doesn’t get it.

Still no updates for my Desire Z? stupid 512RAM :-p

This. Seems really suss. I don’t even think the Desire HD could handle 4.2, let alone 4.3. And I know HTC aren’t the best at updating their devices, but the One S should at least make it one more version before it’s abandoned.

Does anyone know how HTC rolls out updates to “outright” purchasers from companies like MobiCity ? I bought mine from MobiCity but didn’t give updates a second thought. Now I am wondering (and fretting) …

Phones purchased unlocked are straight out of the HTC factory. They are the first one’s to get updates depending on regions.

I concur. I bought a HTC Desire (original yo!) from Mobicity the day they came out – got updates a long time before the carriers offered them. Can’t say it’s a rule but in my experience unlocked-from-the-box phones seem to have a much better experience with updates.

Updates for Unlocked and Unbranded HTC phones have nothing to do with who sold them eg. mobicity. Generally the updates will come from the HTC branch where the phone was supposed to go on sale. For example if that HTC phone was supposed to be sold in the UK but Mobicity bought it from suppliers there and imported it into Aussie, then no matter what carrier you use the phone with, you’ll be getting your updates alongside those who have unbranded phones in the UK when HTC UK decides to release the update. This is all of course assuming you… Read more »

@Hikari07 @Krishna @PuGZoR .. thank you for the information. Funny thing about my Unbranded HTC One is that it i supposed to be an Optus phone. Can’t remember where I saw it but when I was doing something to it (rooting, I think) I saw the words Optus Australia somewhere. Oh this is frustrating to explain. Thanks anyway.