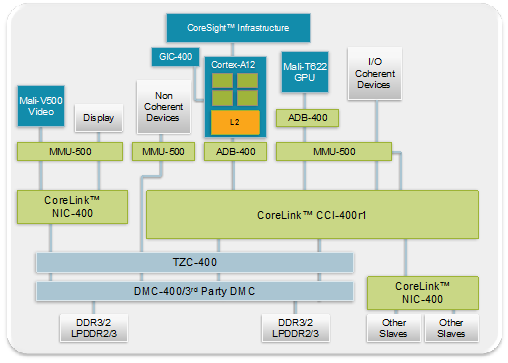 ARM have today announced a new SoC based on Cortex-A12 architecture that will launch around the middle of next year. Cortex-A12, while quite powerful by any standards, isn’t up there with high-end Cortex-A15 found in the likes of Samsung’s Exynos 5 and NVIDIA’s Tegra 4. What this new SoC does bring to the table is a very low-cost, powerful and energy efficient CPU and GPU combination that can be put into cheap devices that can be sold into emerging markets.

Getting into benchmarks, the Cortex-A12 CPU is 30% smaller than Cortex-A9 chips and is 40% faster. The use of BIG.little can theoretically boost energy efficiency by 100% — a very impressive stat on paper.

Guys, ARM doesn’t produce SoCs – ie chips. They produce the architectures, and the CPU and GPU cores as designs. SoC producers like Samsung, Qualcomm, Apple and now AMD map the reference designs to their silicon manufacture processes, and add other components in that spot on the diagram that says ‘Other Slaves’. These could include things like 3G modems, WiFi, sensors like accelerometers, USB controllers. At that point in the design it’s an SoC, it’s it has more than just the CPU and GPU it’s a whole system. Then the SoC producer can actually manufacture the design into an actual… Read more »