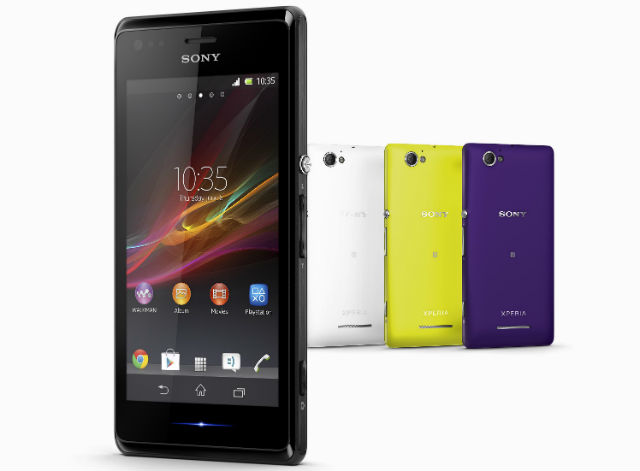 The Xperia M will have a 4″ FWVGA(854×480) screen on the front and 5MP fast capture camera on the rear with a dedicated camera button on the right hand side. Inside will be a 1GHz Dual-Core Qualcomm MSM8227 CPU with 4GB of storage as well as a microSD Card slot that will support up to 64GB cards. The phone will also pack NFC to encourage new smartphone owners to be able to pair with all the latest NFC enabled accessories and Bravia TVs.

Software wise the Single SIM version is listed as supporting Android 4.1 while the Dual SIM version has Android 4.2 listed. The Xperia M will come with all the usual Sony software enhancements including their access to their “Walkman” entertainment platform to allow consumers to access entertainment on their mobile, tablet, desktop and console platforms.

The Xperia M will come in both Single and Dual SIM configurations in Black, White and Purple with the Single SIM config getting a release in Yellow as well. Both models will be available worldwide from Q3 2013. As soon as Sony Australia advise on availability we’ll let you know.