Evernote, the cross platform note taking app, which has been the go-to app for most people since they got a smart phone; added an update overnight which brings some new features that bring it inline with the iOS version of the app which was updated a couple of weeks ago.

According to the official Evernote Blog their most requested feature ever was Reminders and with this latest update they are now available. The reminders update includes three features: alarms, note based to-dos and the option to pin notes to the top of your notes list.

To add reminders it’s delightfully simple as outlined in the video they’ve created. There is now an alarm clock icon in your notes which allow you to add a reminder to a note that includes a date as well as time. The sub-menu also allows you to clear a reminder or mark as done which allows you to use your notes as a to-do list.

Adding a reminder to a note also adds a sub heading to your Notes list called reminders, with each entry beneath the Reminders Sub-Heading coming up with a check box that allows you to tick each one off as you complete it. You can also long press on the item to clear reminder, change the date or edit the note. 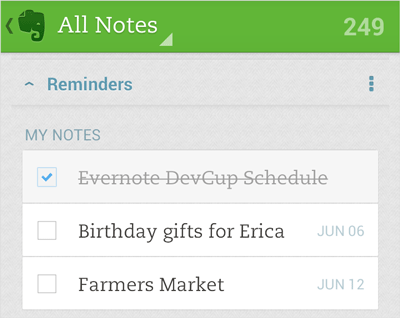 Evernote also advises that Reminders will sync across all your devices, including Mac, iPhone, iPad, as well as Evernote on the Web.

It’s a real attempt at keeping much more relevant with Google Keep now a player in the note taking space. The new updates are easy to use and do add a lot of functionality. This is a reason why it’s good to have some competition in the market place.

Have you migrated to Google Keep or have you retained your Evernote account?

Staying with Evernote. Google Keep is missing a lot of features that makes Evernote the number one choice. But I suppose gKeep will get better with age.

Too late, already using Keep for this sort of stuff. I’ll just keep using Evernote for my class notes though….

Next Launcher 3D is free with app of the day.