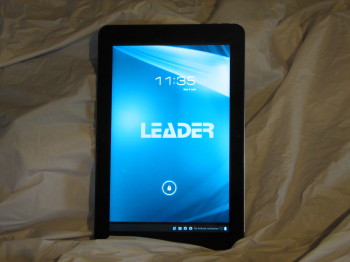 The “budget concious” 10-inch tablet market is a dangerous one to play in. The race to the bottom seems never ending, with slight savings on build quality, performance specifications, old versions of Android and other omissions to make a price point. There’s been some notable attempts at 10-inch tablets that simply weren’t up to standard, from manufacturers as big as Samsung and Motorola. The original Galaxy Tab 10.1 available via Vodafone and the Xoom spring to mind immediately.

With the Nexus 10 from Samsung and the Sony Xperia Tablet Z joining a growing list of tablet options, there’s an emerging gap in the 10-inch tablet race. At one end, there is the true performers, from internationally recognised manufacturers, and at the other end, the budget conscious devices. The latter tend to fall into two categories: a complete disappointment or a pleasing purchase which offers good “bang for your buck”.

The Leader Tab 10” from Leader Computers has been available through selected retailers for a few months now following it’s launch in March. It’s important to note that Leader is a wholesaler and will not deal direct with the public, they will simply refer you to your nearest reseller.

While the Leader Tab 10 hasn’t been advertised in commercial media, there’s a catalogue that Leader put out regularly to drive business to their resellers. Until recently, the Leader Tab was $299 (RRP) but in the latest catalogue available from 4 June, Leader has dropped the RRP to $249.

For your $250.00, the Leader Tab gives you the tablet itself, charger, MicroUSB cable and a printed instructions manual.

is there anywhere to get cases for them please?

We were given one from a friend but my son dropped it and the screen has a crack in it..been to about 10 places and none can fix..how do I replace the screen?? Or should I just buy a new one lol?

What exactly do you mean by the video being “laggy”? Every now and then it freezes for a tick (how frequent is this?)? Sound out of synch with video? Slow to start up?

loses sync on video and jumps around a little to catch up.
probably every few minutes you get a couple of ticks.

Start up time is acceptable, but could be a bit quicker with better optimisation.

I purchased one online at http://pchappy.com.au/tablets/slates/android/leadertab10-android-10-tablet. For a mid range unit it is pretty good.