Last month at Google IO Google released their subscription based streaming music service, Google Play Music All Access. Here at Ausdroid we tested it out and found the new interface and the options included in Google Play Music All Access to be fairly extensive and were very impressed with it, with one main downside – Data usage.  Though Google music detected your data connection speed and modulated the bit-rate of the streaming music to produce a similar performance no matter what the connection speed.  The result of this was the Google Music app appeared to consume large amounts of data when compared with similar services (eg. MOG Music).  Today Google have released an update to the Google Music app that is meant to, among other things, solve this issue. 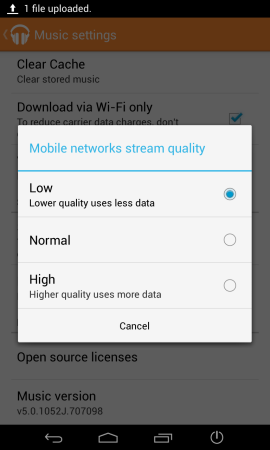 The update allows the user to choose the “Mobile networks stream quality”. The options do not give details of bitrate or similar but give a high, normal and low setting, with low using the least amount of data.  After testing these settings for an hour it seems that the high quality is the same as the previous streaming quality with respect to data usage, normal is half to two thirds of this and low is under a half of the original data usage.  The quality of the music on low setting is still a quality where the average user will not be able to distinguish a major difference from this to the high quality setting.  This update of the app and service now, in my opinion, make it usable here in Australia where data allowances on carrier plans are decreasing more and more each year.

For those who have also tried to download songs to their device while on wifi to save on data usage later will find this much faster to perform as well as search finding results a lot faster according to the changelog of the update: 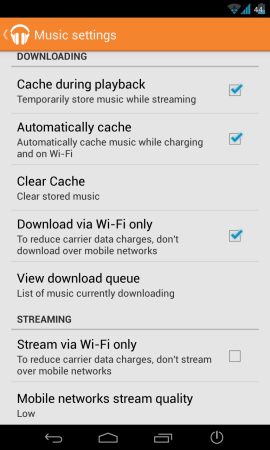 The new update to Google Music app should be arriving on your device today – check Google Play for app updates if you have it installed and if you’re using Google Play Music All Access, then I urge you to try it out. If you’re not using it, check out our guide to subscribing for people here in Australia to give it a shot.  Remember, for those who sign up to Google Music All Access before the end of June can do so at the discounted price of $7.99USD.

Without doing any scientific testing… I have to say steaming seems faster on three normal quality option now by default.

Been using the app heaps but unfortunately I get constant errors when trying to use the instantmix feature.

Was there a way to download store purchases in a lower quality? 320kbs is great but not when you have low storage on your phone. 😛

And other question? is that a sleep button at the bottom next to onscreen buttons 0_o

Pretty sure that’s just the ROM.

Nice update, I moved all my music to cloud and i’m happy as i no longer have to depend on the phone storage (I’m using ALDI mobile unlimited with 5gb) With a decent speeds (6 mpbs) i’m a happy listener 🙂