After an expensive drop-and-smash of my Galaxy Nexus, I’ve felt the need to protect my devices a little more. My Nexus 4 lives in a red gel case (probably with good reason) and I have screen protectors on all my devices. I was already living the Paranoid Phone Owner life when Buzz had a butterfingers moment so soon after getting his Galaxy S 4, so I knew I’d have to protect mine properly. Enter the Otterbox.

Otterbox started making waterproof boxes and protective cases about 15 years ago, and now produces a range of cases for consumer electronics, including most popular smartphones. Most Otterbox cases come with multiple pieces to afford greater protection of your device. I’m a tad concerned that I don’t quite fit into Otterbox’s target market of people who “live their lives to the fullest and want their mobile devices to come along for the ride” — I mean, besides riding around Sydney playing Ingress, I’m not sure I put too much stress on my phone but at least it does come for the ride.

We’ve had two Otterbox cases on test for the Galaxy S 4 – the Commuter and Defender. The Commuter provides general protection against dust, drops and scratches and retails for $39.95 while the Defender is far more rugged and bulky – it provides greater shock protection, comes with a belt clip and runs $59.95. The range works somewhat cumulatively — the more expensive cases afford you the benefits of the cheaper cases plus a bit more, as you work up the line. The cases come in a pleasing array of colours and designs, although our test units were plain black.

In the past, I’ve felt that the only thing I needed to protect my phone was a pouch. I’m starting to change my mind on this, although I still find that most cases add an unattractive amount of bulk to a device. A gel case or a thin plastic case is an acceptable tradeoff as it adds grip (especially important on glass-backed devices like the Nexus 4, Optimus G and Xperia Z) without adding bulk. Perhaps as phones get larger, the proportional amount of bulk added by the case is smaller.

The other contributing factor I find compels me to protect my gadgets now is price. Like me, you might find the Galaxy S4’s RRP of $899 a good reason to put it in a case and try to protect it from accidents. No matter how careful you are with your phone, other people likely won’t be. 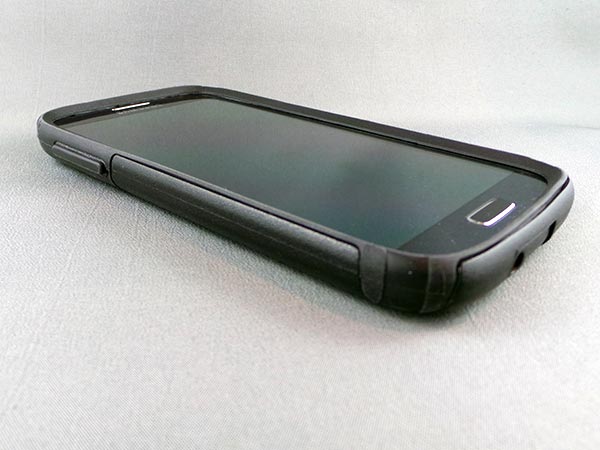 The Commuter comes in two parts – there’s an inner silicon sleeve that slips over the device and contains cushioning to protect against drops, and a harder polycarbonate outer shell in which the silicon sleeve rests. The outer shell has a patterned back and curved edges, making it easier to hold in your hand and providing a good grip.

The USB and headphone ports are covered by flaps, and there’s also a traditional screen protector you can apply to protect the front of your device. While the case won’t make your device waterproof or dustproof, it’ll provide a bit of a barrier against rain or splashes.

The side on the front slope down towards the screen at a pleasant angle – there’s no steep edge sticking out as seen on other cases, and means you can still use the edge of the touchscreen – an important consideration on a device like the S4, which doesn’t have much bezel on the left/right of the screen. The case has moulded buttons that protrude nicely and make the power and volume rocker easier to hit, and keeps its distance from the rear camera and flash.

The overall effect of putting the Commuter case on the device is that it makes it feel a little older, larger and heavier – like a Desire HD, perhaps – but it feels comfortable in your hand, grips well so it doesn’t fall out of your hand, and sturdy. My phone’s taken a couple of unintentional tumbles in the last couple of weeks, and was well-protected.

Notably, the silicon sleeve seems weakest along the top and bottom edges at the front of the device – these get the most wear and tear as you push the phone in and pull it out of your pocket. Similarly, the flaps covering the ports are a nice touch but they can make the ports a little difficult to access – they also feel like they could break off if you pulled them hard enough as the silicon is thinnest where the flap needs to bend. Turning the Commuter’s materials inside-out, the Defender consists of an inner polycarbonate shell made of two halves completely encloses your device – screen and all – which then in turn fits into a silicon outer layer which has a similar pattern to the Commuter, affording it better grip. This can then be held in a clip, attached to your belt.

The Defender is big, but your phone is locked away inside a couple of protective layers and feels like it could withstand a small military assault. The USB and headphone ports are still covered by flaps, although they open in the opposite direction on the Defender. As with the Commuter, buttons protrude nicely and are easy to press and the case doesn’t obscure the rear camera or its flash in any way.

The inner shell is hard plastic – on the test case, bright yellow – which locks into place at a number of points around the device. The outer silicon shell then slips around the inner, holding it firmly inside. The whole setup doesn’t go so far as to be waterproof though, with the speaker grille, front camera, home button and IR blaster exposed to the elements. “Exposed” is a bit unfair, because the combined protective layers around the device should shield it very well from moisture and accidents.

The outer shell leaves two tabs from the hard inner shell exposed on either side, allowing it to snap into the belt clip firmly. Given that the belt clip works best horizontally, it’s puzzling that the clip can only attach to your belt vertically. I’d have liked to see an option to rotate the belt clip to work either way, and instead settled for running the clip through a loop on my jeans rather than clipping it over my belt directly.

I was skeptical of the built-in screen protector at first, though I needn’t have worried. The case is well-engineered and there’s no gap between your phone and the screen protector. It’s not perfect (an occasional bit of friction might stop you completing a word using gesture input), but it did allow me to use the phone with wet fingers. Daylight visibility is decreased slightly, but it’s nothing you can’t compensate for with screen brightness. If you use polarised sunglasses, you might find the screen looks a little funky through them – this isn’t unusual for smartphone screens, though.

Ultimately, I feel the Defender is probably a step too far for me for everyday use – it’s simply too bulky. I could see my way clear to using it if I were often in an environment where my phone might see unexpected impacts, but I don’t work in that kind of environment (and my phone is in my bag while I’m riding).

I was surprised how much I liked the Commuter case, though – despite the added heft, it’s a decent trade-off for device protection, and it felt reassuringly good in my hand. I’d like to keep a Commuter on my S4, which is probably the highest praise I can give it.

I just got my Defender today and it seems like a good product to protect the phone. My only negative is that I bought a white Galaxy 4 and the case does not come in white. It is gray and the part with the clip is black.

at $60 would probably be easier to pay that little bit more for phone insurance….

I got a commuter for my S4 and am very happy with it. Only had a couple of little knocks so far but feels and looks good and seems to offer good protection. I like the lip over the screen so I can put it face down on stuff too.

I started using Otterbox with my HD2, getting an Commuter. They’re great cases. Their warranty process is easy and fast as well (the plastic part at the bottom of the case had cracked. Took a photo and they replaced it). I went for the Defender with my S4, mainly because I feel more comfortable with the added protection as I trek around placing resonators and hacking portals. The port covers on the S4 are a bit chunky, but the case overall feels good in the hand. I am a bit confused by your comment about the belt clip. It rotates,… Read more »

The printed instructions don’t indicate that it can rotate. The belt clip doesn’t want to rotate on the review model. I just tried, and it felt like it was going to snap off. 🙁

Weird. Both of the cases I’ve tried ‘click and lock’ right around in 360 degrees (i.e. you turn it and it clicks and locks at 30deg intervals)