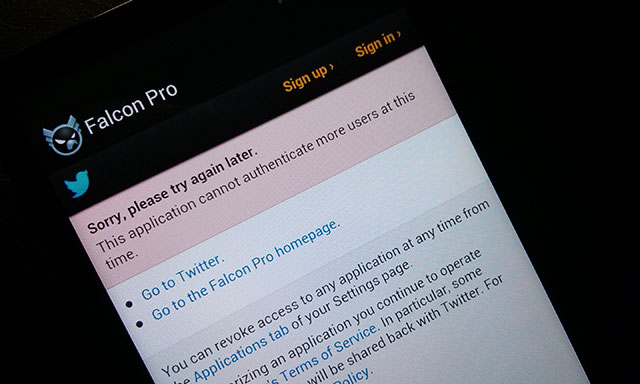 Vergès has reset the application token, invalidating existing user authentications, and has released an update to the app with the new token. Falcon Pro users will need to login to the app again after installing the update. Settings will be maintained as they are stored within the app.

While this solution works in the short term, Twitter’s token limit severely restricts any developers who don’t enter into a partnership with the social media giant – partnerships which are offered at its sole discretion. We remain hopeful that Twitter will open up and offer partnerships with less restrictive conditions to developers and allow higher token limits, which has previously been refused to Falcon Pro.

Have you paid for Falcon Pro and no longer using it due to the repeated reset of tokens? Let us know in the comments.

Love the app. Noticed it had gone over the other day and just waited for the token to be reset to happen. Got into this app pretty late, but for the past few months, the app has been receiving lots of updates. Of course we had to pay for it, its too good of an app.

Twitting is for twits afterall

Nope I love this App it is great on both my Nexus 4 and 10. Wouldn’t use anything else. I am happy to do what it takes to keep using it. Not the dev’s fault. It’s twitter and their stupid control / token limits. If only they had the features and UI in their official app I would use it!