It seems realistic that you can judge a phone’s market penetration by the number of accessories available for it. As you move around any shopping centre, you’ll find a couple of “mobile phone accessories” stores that will sell you any number of cute, cuddly, wacky or fun iPhone cases with any number of party piece special feature attached. This level of ubiquity is only achieved by a few Android devices – with a larger variety in the market, it’s harder to offer something for everyone, and it’s only in the latter half of 2012 that we started to see widespread availability of Galaxy S III accessories, followed swiftly by Galaxy Note II. I’m frequently disappointed when trying to find cases for my Nexus 4.

On this basis alone, the number of cases we’ve seen for Samsung‘s Galaxy S4 serve as an indication that it’s a market leader. With 10 million units sold already, it doesn’t seem like accessory manufacturers are willing to argue this point, and we’ve already reviewed cases from Cygnett and Otterbox, and you can find a growing number of generic gel cases in any of the accessory stores.

An Australian company, DroidAX is headquartered in Adelaide SA, and provides quality products at a competitive price. We’ve reviewed a number of their products in the past, from the Portacharge to the EzyCharge and EzyCover – all of which were well-received and carried out their duties without breaking the bank. 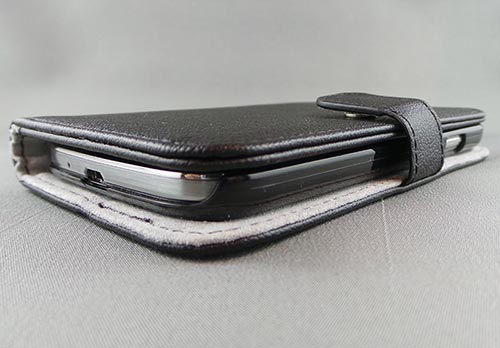 The Kratos holds your device in a hard plastic shell within a synthetic leather “folio style” wallet. With a Galaxy S4 inside, it’s hard to fault the case on looks – it’s a nice departure from the super bright technicolour frenzy that greets you in most phone accessory shops, but you need to look a little closer to see if it’s the case for you.

As protection goes, it keeps your phone covered on all sides – while the top and bottom edges aren’t covered by the plastic shell, they’re still protected from clumsy drops by the wallet itself. The case can also hold three credit-card-sized cards of your choice, and has a larger pouch which seems designed to carry notes. There’s a snap button that wraps around the side and fastens to the front to hold the case shut. While the outer wallet is available in black, red or pink, we’ve been given the black one.

The plastic shell that holds the phone into the Kratos case is a fairly tight fit, and it took me a few hours to realise I hadn’t quite fully clipped the phone in at first. The power and volume buttons are exposed through the case, although they are more difficult to press – annoyingly so, at times. As with the S View cover, the volume buttons are located in the case’s fold. You can press them through the fold when the case is closed, although it feels like you’re not really meant to do so. The camera, headphone, IR and USB ports all remain accessible and usable.

While the official press for the Kratos mentions a magnetic clasp to secure the case closed, the review unit has a snap button fastener. This unfortunately adds some bulk when the case is closed, and means it’s most comfortable in your pocket with the screen of your device facing out – something I’m loathe to do. I’m left wondering if it was a last-minute alteration to the design.

The case does include magnets necessary to unlock the phone when it’s opened, however. This means it also provides S View functionality, although this seems like an accident. If you press the power button before opening the case, you’ll see the bright AMOLED screen showing the clock and notifications briefly before the unlock mechanism gives way to the normal homescreen. As Buzz found with the S View cover, there’s a brief flash of maximum brightness when unlocked this way before the device adjusts to the automatic (or manually) selected brightness.

Owing to the fastening of the plastic shell to the case on the right, you can fold the Kratos around to act as a stand, making it quite useful in landscape mode for video conferencing or watching movies. While the official photos suggest the way the case should be set up as a stand, I actually preferred to wrap the case around on itself to the rear of the device and use the snap button fastener to ensure it stayed upright.

Unfortunately, while you can store 3 cards in the front flap, the larger area can’t hold Australian currency larger than a $10 note. It probably won’t serve you well as a money holder if you use cash a lot, although you could store frequently-used cards and try to go all-credit for a night out. You might also want to be careful of your cards coming in contact with the screen when the wallet is closed, but DroidAX will also sell you a screen protector to allay those concerns.

I enjoyed using the Kratos, but there are too many trade-offs in comfort and accessibility for it to remain on my phone permanently. If you carry your phone in a jacket pocket, you might appreciate the ability to keep your phone and some of your more frequently-used cards together. Either way, it’s nice to see a case that’s not just a rehash of Samsung’s own S View, Flip Cover or Yet Another Gel Case. 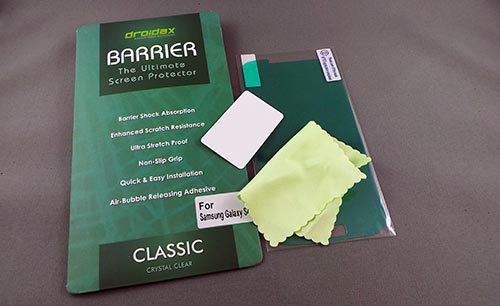 While opinion varies on whether a screen protector is worth the $14.95 asking price, as someone who’s smashed a screen in his time I find them essential – should the unthinkable happen, a screen protector might actually allow you to continue using your device.

Touted as “crystal clear” on the packaging, the Barrier lived up to its claims, providing a smooth, frictionless surface once applied to the S4, and didn’t cause any loss of viewing angles. It was almost impossible to tell it was there when looking at the device.

DroidAX sells the Kratos (in a number of colours) and Barrier from their site: