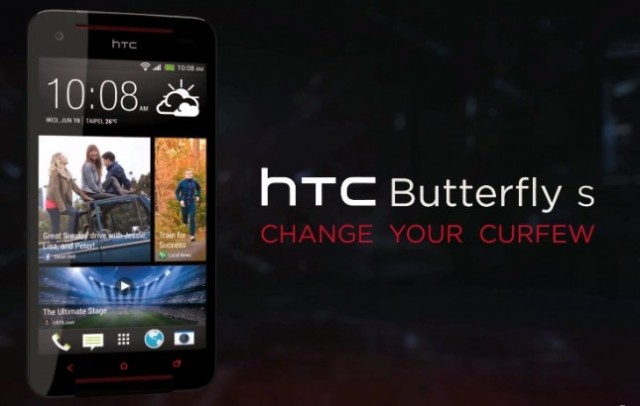 With a strategy that seems to be unique to HTC, today in Taiwan HTC announced the HTC Butterfly S. This device is the successor to the HTC Butterfly which we reviewed less than favourably earlier in the year and as per the original Butterfly the specs of the S version are impressive.

The HTC Butterfly S comes with a Snapdragon 600 clocked at 1.9GHz, 2GB of RAM, a 5″ 1920 x 1080 fullHD display, UltraPixel camera, front facing Boom Sound speakers, 16GB onboard storage with a microSD card slot and 3200mAh battery. The HTC Butterfly S will run Android with Sense 5 however they have not specified the version of Android.

Late last year HTC announced they were going to slow the release of new phones and concentrate on one flagship.  Then in February when they announced the HTC One we were led to believe this was to be their 2013 flagship.  So where does this leave the Butterfly S?  The specs on it seem to be an upgrade from those of the One.  A massively improved battery, an sd card slot, a higher clocked processor, and now available in four different colours – Red, White, Black and Grey – make it a definite player in the high-end phone category, although a lack of LTE in the Butterfly may hamper its chances somewhat.

So which is it HTC?  Do you still have a “One phone” strategy?  Where does the Butterfly S fit in?  Have you changed your mind about the one phone idea and would rather just release phones with incremental upgrades every few months thereby keeping their flagship fresh and at the top of the heap?  Time will tell what HTC’s plans are but nothing they do would surprise me.  One thing for sure though (in my opinion), they still make the most beautiful phones around.  The Butterfly S is no exception to this.

As the original HTC Butterfly was never released officially in Australia it’s not definite that we will see the Butterfly S here in Australia. So far there isn’t any news on an Australian release, nor for any other country but we’ll be asking HTC Australia and will keep you posted if we hear anything.

If you picked up the HTC One would you be annoyed at HTC for releasing a slightly better phone less than a few months later?  If you were thinking of getting a HTC One will you now consider this instead?

Nah! Not annoyed at all. For me, personally, the HTC One is still the best HTC I have ever owned. Things like bigger/removable battery and a lack of microSD card slot are not important for me. But I must say I do like the red colour.

Im hearing no 4G on this?

Well it’s only for a certain market that don’t require lte so I wouldn’t call it a fail.

In Asia, Micro SD is very popular, so are glossy backs, hence why you see them in the Butterfly S. The HTC One on the other hand was a phone designed very much for Western tastes.

You won’t be seeing this phone (officially) in Australia, Europe or North America.

Louis B
Reply to  aryonoco

Why are glossy backs important in Asia…
And FYI HTC is selling this phone off-contract in the US.

It’s for the Asian market, unlikely to be released elsewhere.
The Butterfly was a huge success in Asia so you can understand them having a follow up.

No, wouldn’t really be annoyed, I mean slightly as first. But this is business as usual for these huge companies. It’s not unheard of at all.