When looking at the 10 inch tablets, the clear and obvious head of the pack is the Apple iPad; it’s been around the longest and has somewhat of a stranglehold on the market segment. The Nexus 10 is very popular in terms of the Android market in the 10 inch range and now Sony have brought their Xperia Tablet Z into the fray.

In the box you’ll find the tablet as soon as you remove the lid, even when turned off it’s quite a striking piece of hardware. The charger which is your standard wall plug to USB adaptor and a MicroUSB cable as well as the instruction manual which is not much more than a multilingual quick start guide.

The Xperia Tablet Z is the first tablet and one of the first Sony devices to be released inside their new four screen strategy. Aimed to ensure that Sony have a reliable and clearly “Sony” experience across their Smartphone, Tablet, VAIO Laptop and PC’s as well as their TV’s the strategy should stop the attractive and great performing devices Sony have produced in the past being brought down by low resolutions, poor performing screens. Immediately when you turn the tablet on you’ll see that the strategy has succeeded for this device.

Out of the box the Tablet Z is running Android 4.1.2 which, while relatively up to date isn’t the latest version. A little trawling around the technical forums showed up very quickly that the Android 4.2.2 update has been reviewed, approved and is coming soon.

It’s lovely to see that while Sony have their own software installed on the device such as Walkman and their own proprietary video player, there’s no intrusive “enhancements” that they’ve decided are best for user experience.

The main smart enhancement that is really obvious in interaction with the device is actually that, smart! You can dock apps in the mini app bar which is always accessible through the soft buttons at the bottom of the screen. Very handy for things like Hangouts, Email if you’re inclined to flip in and out of email at regular intervals and apps such as remote control (previously mentioned) for your TV.

There’s a number of Sony apps that are on the Tablet Z out of the box. Some of these such as “Album” replaces the default Android Gallery, Walkman and Movies replaces the default media playback apps. The tablet app setup on Android is something of a problem for a number of tablet manufacturers, until recently when Google started to directly encourage developers to produce apps for Tablet screen size there was very few apps that were truly optimised for the extra screen size which made apps look terrible when they were scaled up and in turn; the tablets were made to look bad.

Having such a high resolution screen had the potential to hurt the Xperia Tablet Z, but their inbuilt apps all look clean smooth and at home on the larger, high resolution screen. The native Gmail app, as well as a few other social apps (Falcon Pro and Tapatalk HD) also looked really good on the HD screen of this tablet.

I take my hat off to Sony; They nailed this one!

They’ve included a really impressive screen, in a device that has acceptable storage (expandable with Micro SD), Micro Sim if you want cellular connectivity, Bluetooth 4.0, NFC, great sound and exceptional battery life even under quite substantial and sustained load on the device.

The various model costs are as follows

While the price tag may deter some users, the spec sheet and performance of the device will be a great motivator for most who are looking for a good tablet that’s going to perform well for some time to come. 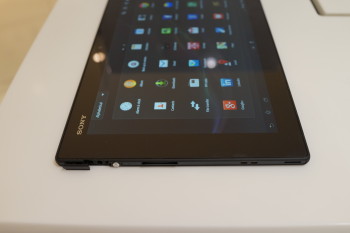 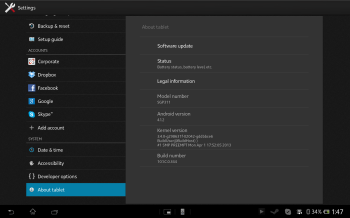 I just got a Tablet Z, and initially had very frequent wifi disconnects due to “authentication problem”.

I have a 2.4GHz/5GHz router, initially with the same SSID and the same password on both frequency bands. I then configured the router with different SSIDs and passwords for the two bands, connected to the 5GHz network, and the problem seems to be gone!

And the bonus is the significant extra speed you get with 5GHz. Briiliant!

I got the tablet Z on pre order, am now on my third unit after two replacements. the first two had faulty front camera angles. first mic had a lot of sound issues, 2nd and third unit have white noise on video recording, skype and voice notes have really low recording volume. now the volume issue is obviously not a hardware issue as it works excellent with google +, ultra clear sound. And the issue of the mic is not common to all units. some units in uk have had these issues, and similarly in other countries. we have been… Read more »

I bought the LTE version last week and this is the best tablet I have owned and used. I had the Asus transformer infinity and compaired to this I wouldn’t even both picking up the infinity. The performance is stunning, fast, responsive, great screen just an all round great device. And take note Asus, when someone say they will release an LTE version of a device, Sony actually DO !

I bought the LTE version for my brother, great tablet, the back will flex in though with a bit of pressure. Good luck finding covers and screen protectors for it though. (barring ebay of course).

I bought one of these for my wife yesterday to use while in hospital (she is pregnant with twins) and it is a superb device. I can’t get over how light it is, the screen is fantastic and its super fast. Well worth it I think.

I might even let the wife use it soon 😉

I noticed that you said “The screen is truly stunning, running 10.1-inch 1920 x 1200 TFT LCD (224ppi) it’s possibly the prettiest screen I’ve ever seen on a tablet” Are you saying it looks nicer than the N10’s higher res screen, or that you haven’t used it to compare?

Hey Alexei,
Yeah I’ve used a Nexus 10 and they’re very close, but I (personal opinion) found the color more vivid and the brightness adjustment a bit better. Granted I’d have to see them side by side to be sure, but I’d suggest that I would put the Xperia Z above the Nexus 10 in first place for screen.

Another slight side argument on that point: How much resolution is too much on a 10″ screen?
Could you HONESTLY see the difference between the N10 and the Xperia Z screens?

Yeah fair enough, and big agreement that the pixels aren’t the be all and end all. Just was wondering if you’d used it, as to me that is the reference point for high end tablet screens. If you say that it is as good or even better, then I can be certain we’re talking about a damn nice screen here!

It’s easy enough to find with a quick google, but it might be worth including the RRP somewhere in the review, especially since you mention it a few times…