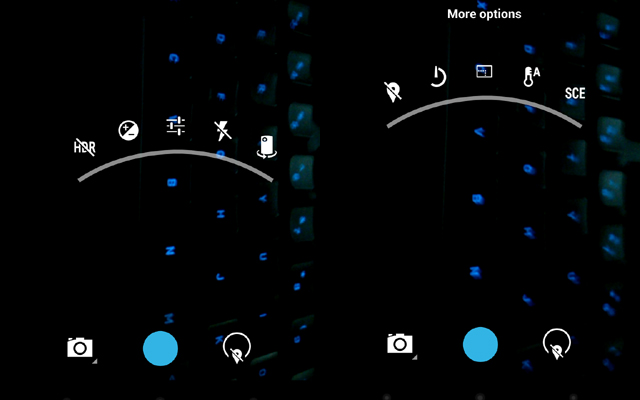 With the ROM dumps for the Google Edition HTC One and Samsung Galaxy S4 now out in the wild, it was only going to be a matter of time before things were pulled from it, first the Boot Animation and Sunbeam Live Wallpaper were pulled and made available and now the updated Camera App has been let loose as well.

The best part of the Camera App APK is that as well as updating the Camera/Gallery app on your Nexus device, it also installs on non-Nexus devices quite well; sitting alongside the various camera apps installed on OEM Skinned devices like the Samsung Galaxy S4 and the LG Optimus F5. The advantage of having the stock camera installed appears to mainly be Photospheres, although that option is only available on phones like the Galaxy S4 which is running Android 4.2, the LG Optimus F5 running Android 4.1.2 however doesn’t get it.

At nearly 17MB in size it’s a pretty decent download on Wi-Fi. The XDA thread which contains links to the downloads has advised to create mirrors of the files so here’s ours :
Mirror 1
Mirror 2

Update :
A few users on custom ROMs are having issues with the APK, over at Android Coliseum they have provided a flashable Zip to install from your Custom Recovery, it’s slightly larger than the APK at 18.35MB but here you go :
Android Coliseum Download Link
Mirror 1
Mirror 2

I’m a massive fan of Photospheres, being able to take them on the Galaxy S4 is great, although the option to retain the Samsung Camera app is even better. Download the APK, install it and see what you think. To me the menu still doesn’t feel right, sliding up to access ‘More Options’ feels a little off but this could possibly be just me but it is nice to be able to see all the options now.

What do you think of the updated camera app?

Awesome, been wanting this for ages. Working great on Xperia Z

Ditto works on stock s2 4.1.2. Photosphere is just awesome. Thanks for heads up.

Works fine including photospere on my Xperia Z on 4.1.2

Works perfectly on my GS3 stock version 4.1.2.. Finally can play with photospheres!!

The Camera APK worked perfectly on my stock Samsung S4 – can now use the stock camera and gallery if I wanted – in addition to my S4 camera. Great find and thanks for sharing!

As I remember, photosphere only runs on CPUs with NEON instructions, so if your phone doesn’t have that, it won’t run.

Installed it on my Nexus 7 just to see. 😛
Works but still no panorama or photosphere, as expected of course.
It really does improve the gallery too. Makes it a bit more zippy!

After testing it quite a bit I have decided not to use it. I have a nexus 4 running aokp nightly without the gapps camera. The aokp camera has many more options. The camera leak must have the package name the same as the Aokp camera (Gallery2.apk) and thus won’t over write it due to differing signatures. I can flash the new one over the top but then I lose the aokp camera. Renaming the newcamera.apk to GoogleGallery.apk (the name of the camera in gapps) does not work. Oh well… Maybe someone will fix later….

Can now use the volume rocker on the Nexus 4 to take a photo.

Beware though, after installing I had a full android system crash. Has been ok since it rebooted. Also, sometimes the settings icons don’t appear.

Really? I’ve been playing with it since installing and no issues yet. Wonder what’s different?