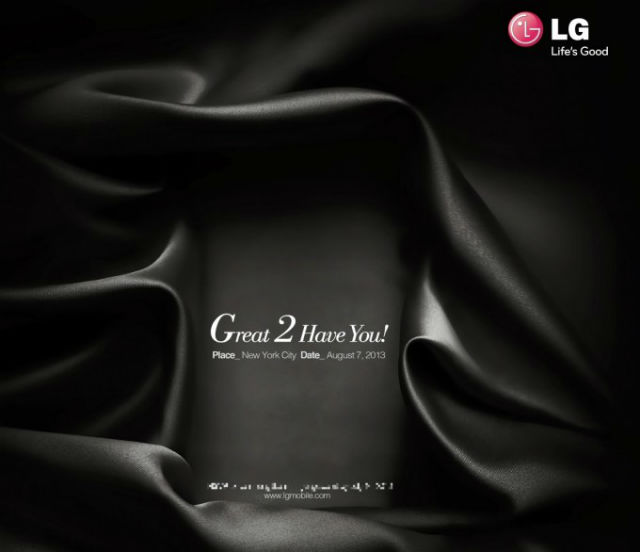 LG has sent out invites to the August 7th event in New York, that they were talking about last month. Even though LG has nothing to say on exactly what will be shown off at the event, it’s widely thought that the successor to the nearly one year old flagship the LG Optimus G will be announced.

We don’t want to read too much into a picture/invite but you can see a heavy emphasis on the G and 2 in the first line and we know that companies love to put hints into the invites they send out.

So far it’s highly likely we’ve seen a blurry image of the back of the Optimus G2 which shows off back mounted buttons and we’ve seen a pretty clear shot of what is supposed to be the front of the phone from @evleaks .

The specs for the Optimus G2 are destined to be pretty good as well, with LG already having confirmed their Optimus G range will contain the Qualcomm Snapdragon 800 CPU, further specs for the G2 are rumoured to be high end as well with a 5.2″ Full HD 1920×1080 resolution screen, 2GB RAM and a 13MP camera.

We’d just like to remind LG Australia that Ausdroid staff are sitting ready to go with passports ready if they want to shoot out an invite to the event ;).

Gee, I wonder what it could be….

🙂 One of the less cryptic hints in an Invite that I’ve seen.

the top invite looks like their might also be a PRADA series introduced……and seriously i dont care ;p

🙂 One of the less cryptic hints in an Invite that I’ve seen.