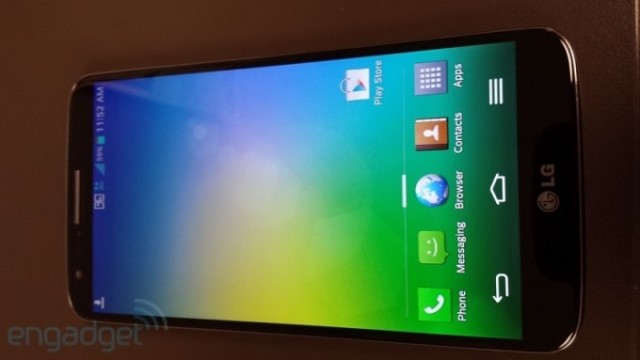 LG’s upcoming flagship device, the Optimus G2, has found its way onto the internet in some new kind-of-clear photos and a video. They show a very large display, rumored to be 5.2-inch thanks to its small bezel. LG have opted for on-screen buttons which is all well and good, but they appear to have a menu key instead of a multitasking button which seems weird.

Specs for the Optimus G2 include that 5.2-inch display with a 1080p display, a Snapdragon 800 CPU clocked at 2.3GHz, and what we’re hoping is a very large battery to keep this thing alive for most of the day. 2GB of RAM is inside, and on the back is a 13MP camera.

The UI, on the other hand, appears to be a very unflattering rip-off of Samsung’s TouchWiz UI. Debate it all you want, I thought I was looking at the Galaxy S4 in the video.

There is still no definite date of announcement of the Optimus G2, but once we find out anything more official, we’ll of course let you know. 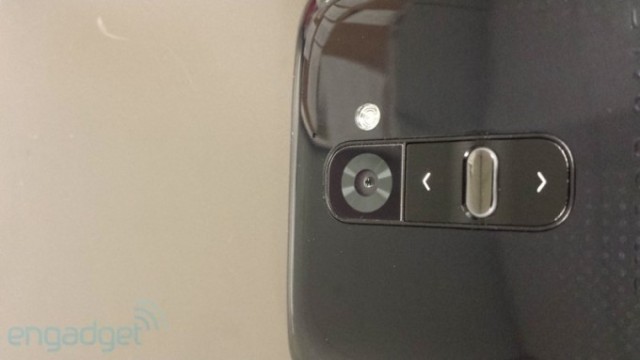 Agreed about the UI design. It’s almost like LG and Samsung teamed up to ruin all the things!

All i want is a ASOP experience with 4g support… This flagship looks awesome. Not so fond of smudging my camera when i’m adjusting volume buttons though… But if google are going to release this without 4g as a nexus phone.. i’m out :'(

wow its very galaxy like..even the UI and weather widget…samsung should sue lol

The G2 as the Nexus 5 would go down well and make quite a bit of sense, considering the design cues copied from the Nexus 4 – it’s a lot more curvy than the other LG phones.

It would doubly go down well if they echoed the Nexus 4’s price tag.

I agree. Great looking phone with great specs. Just an ugly-as-sin skin! same as what the optimus G had.. and the quick slide on the notifications is terrible implementation. Buggerall room for actual notifications. BUT stick an AOSP rom on there and you have a winner. I put an AOSP ROM on the wife’s Optimus G and it runs and looks great!