Home News and Editorial Breathe New Life Into Your Nexus 7 The Nexus 7, when first released, was an amazing device.  It was perfect in size (for me), running stock Android and blazingly fast.  While the first two are still true, the last one not so much in many cases.  What was once a quick, lag-free tablet has for many users become a tablet with near unbearable lag making many put it aside for a different tablet.  If you are like me and treading water waiting for the Nexus 7 MkII to be released you will have tried all types of different custom ROMs and an arrangement of other fixes trying to extend the usefulness of the Nexus 7 hopefully just a few more weeks.

There are 2 solutions I have found  for this issue that will make your Nexus 7 like new once again.  LagFix and Forever Gone (SD Card Cleaner).  Both available on the Play Store and both having free versions.

Nand memory suffers the same issues with deleted data that SSDs do.  Through heavy usage of the drive/memory it can start to lag.  We will define lag as the time while you are waiting for your device to perform a task you have asked of it.  What it is doing is querying the system to find which memory storage blocks are free and which are being used.  It needs to do this to determine where it can write the data it needs to.  This process takes a finite time and the less free space available, the longer it takes. The entire system is halted while while this takes place.  Android attempts to perform this on the fly but other operating systems use TRIM.  TRIM is a command that tells the system which blocks of memory are free for writing.  With Linux, the command to call this TRIM process is fstrim.  “LagFix is a user-friendly implementation of fstrim utility.”  It is a simple app, that I am surprised someone hasn’t come up with before.  Note: Root access is required to use this app.

The reason for it affecting the Nexus 7 is the type of memory chip used by Asus.  As such it affects not only the Nexus 7 but may also affect the Nexus S, Galaxy Nexus, Nexus 4, Nexus 10 and the HTC One X.

There is a free, ad-supported version available on the Play Store as well as a premium version which is ad-free and offers the extra functionality of a scheduler. 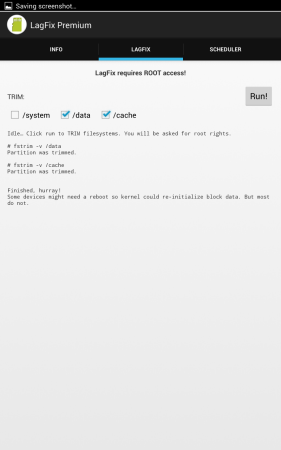 Forever Gone (SD Card Cleaner) works on the theory that when a file is deleted or moved off your memory it retains data that allows it to be recovered at a later date by a data recovery app.  This retained data may slow down the I/O of your memory, creating lag.  “Forever Gone is an app that can make your deleted file cannot recovered. It will create blank files (*.blank) to fulfill your SD card and then delete all of its, so all remaining data of your deleted files will be overwritten and cannot be recovered any more.” 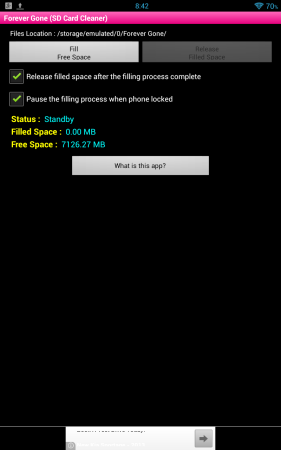 After applying Forever Gone (SD Card Cleaner) and LagFix to my Nexus 7 it was as if I had picked up a whole new tablet.  The lag was gone, and once again it ran how it should.

There are many other things you can do to speed up your Nexus 7 including keeping the free space on the memory at over 3GB, overclocking the CPU and/or the GPU using a custom kernel, and installing a custom ROM.

To help your Nexus 7 last those, hopefully, last few weeks before we see its next generation revealed I suggest you give the above a try.  Sound off in the comments if you have any other fixes worth trying if the above don’t work for you.

‘Forever Gone’ made a vast difference to my Nexus 7’s performance. Thanks for the info!

Haven’t tried either of these yet but the biggest cause of lag I’ve found relates to nand backups with Clockworkmod recovery. For some reason over time, thousands of folders are created in Clockworkmodbackupblobs. Deleting everything in this folder speeds the machine up hugely.

Was already using fstrim, on cm 10.1.1.
Forever gone seems to have made a noticable difference.

Wow, my Nexus 7 was getting close to ‘unusable’. I’ve just run Lagfix and it’s back to it’s buttery best!

Forever Gone seems to have made a big difference to my locked, unrooted N7. Thanks!