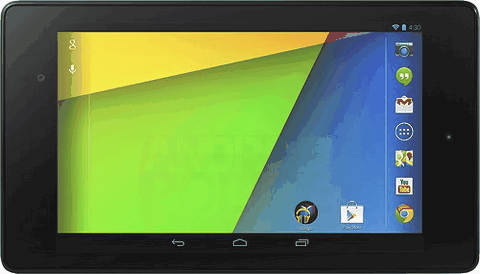 If you´re a Nexus fan like me then this last couple of days has been pretty exciting, the invitation to press to a Google event on Wednesday – Thursday AEST – the retail information, specs leaking and finally the Press shots released this morning by @evleaks, but there´s more.

Android Police has just posted a gallery of lightly water-marked pics of the new Asus built Nexus 7, which shows it off from just about every angle you could possibly want, you can see the cameras – front and rear, speakers and of course that oddly horizontal Nexus logo on the back.

The pictures show off a pretty new wallpaper and a clock set to 4:30 which is usually indicative of the Android version that will come with the tablet, however this new wallpaper is not included in the recently leaked Android 4.3 build for the Nexus 4.

It sure looks looks pretty and we´ll be covering the event in the wee hours of Thursday morning.

Will you be staying up Wednesday night to watch the announcement live?

Really decent refresh of the Nexus 7 – can’t wait to get the tablet in hand! Evolutionary certainly – slimmer overall with a better display plus stereo speakers. Hoping the base model wouldn’t breach the AUD$300 mark when it comes over.

Only complaint with taking an evolutionary approach is they should have shrunk the device size down like almost every other manufacturer does.

The bezels on the new Nexus are a joke for a tablet releasing in the 2nd half of 2013.

I wouldn’t be so unhappy with the bezels if they’d used that space for some front-facing speakers as well.

The top/bottom bezels are, apparently, very slightly smaller than the current N7 but don’t look it because of the overall narrower device.

I’m probably still going to buy it, however…

Front facing speakers on a tablet make much more sense to me than on phones.

The new 7 looks bigger to me but your right it’s smaller in every dimension. 3mm shorter, 10mm less width and 2mm thinner!

I’d have to see one in person but from the photos I think it looks awkward.

Well the “official” ? specs (from Best Buy pre order listing) do actually have the new 7 as about 1cm longer. The reduced width of the new model makes it look even longer in comparison to the old model. Really don’t think I’ll like the look but hope it looks better in the flesh.