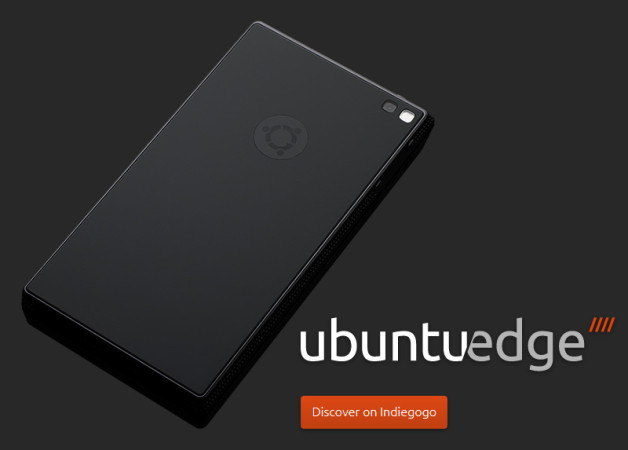 That’s right, Canonical the company behind Ubuntu have just launched an IndieGoGo campaign for their new project named “Ubuntu Edge”. For those who have heard about Ubuntu Touch, the Ubuntu Edge project has been created in a similar sense to what Google have done with their nexus devices.

We’re fascinated by converged computing, the idea that the smart phone in your pocket can also be the brain of the PC on your desk. We’ve shaped Ubuntu so you can transition seamlessly between the two environments. Now all that’s needed is a phone that’s designed from the ground up to be a PC as well.

The Ubuntu Edge Project has a set a target of $32 million dollars with perks ranging from $20 for basic support of the project to $80,000 for 100 units of the Ubuntu Edge, access to online workshops and 30 days of online support. You can get The Ubuntu Edge for $830 excluding shipping, although for the first day of the campaign you can get one for $600 excluding shipping but you had better be quick as there are only 5,000 units available at the reduced price.

Check out the Ubuntu Edge IndieGoGo project page for more info regarding the device and how you would go about getting one for yourself.

Will you be considering getting the Ubuntu Edge? If the Ubuntu Edge project is successful, do you think Canonical will create a tablet version of the Edge?

Sounds dubious, crowd funding offers no consumer guarantees. Its not like preordering from a standard business model where you are purchasing a product.
More like a donation without the tax benefits, and you may get something in return…
Not only that but they take your money right away, Indiegogo sucks because of this and hence why Kickstarter is more popular.
Lastly, by the time it will be delivered, if it gets delivered. The specs will be mediocre.
Now crowd funding thrives on these terms because often loosing $30 isn’t that bad. If you loose $860, then your hurting.

Yeah, you’ve pretty much summed up all my responses to this, too. I’ve spent hundreds of dollars on Kickstarter and Indiegogo projects, but I’m not gonna touch this one. It’s too early in the product life cycle. Is that battery technology even available?

I agree, there’s no reason to why Canonical couldn’t launch Ubuntu edge through a conventional model although they have stated that they don’t really want to get into the device market. Maybe if they did, they might get more people to back the project. The specs of the Edge aren’t great, ok it doesn’t have a 1080p screen but they may not have been able to acquire a 4.5″ panel that suited their requirements. Like I stated above, it’s very much the Nexus program but for Ubuntu.

I’m ok with the 720p screen. There’s really not much extra benefit going to 1080p at that size screen, though it seems that’s going to be the standard for top end phones. But with no definite processor choice and a battery technology rather than a definite product, it’s clear they’re a long way off having a device ready for manufacturing. Maybe two years? It’s a definite “early investment” crowd funding, rather than “get us over the manufacturing hurdles”.