LG has gone from strength to Strength in the last year, at least in the eyes of people who’ve given their higher end offerings a go, the Optimus G and Nexus 4 have certainly been great products that have rivalled the top of the line offerings from other companies so far at the top of the game and just like their South Korean counterpart Samsung, they look set to branch into other Android related offerings, at least according to some recent trademark filings.

The patent filings are for G branded products which LG has recently informed the public is the series that will represent their higher end offerings. The team over at Pocketdroid have come across some trademark filings from the Korean Intellectual Property Office(KIPO) for products branded – GPad, G Watch, G Glass, G Link, G Band and G Hub. Pocketdroid are theorising that these could point to a tablet(GPad), Watch(G Watch), Google Glass competitor(G Glass), some sort of wireless link product(G Link), Fitness device in the vein of a Fitbit(G Band) and an entertainment hub similar to the Samsung Hub(G Hub). 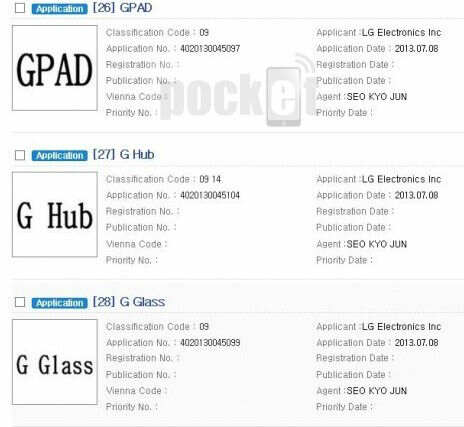 With the scope of manufacturing that LG has access to with its consumer electronics business, none of these products are outside the realms of possibility for the Electronics giant. The success that Samsung has had by diversifying their offerings while building an eco-system is obvious to all, especially those within the Android Open Handset Alliance and LG has obviously been taking notes over the last few years.

While companies like LG file patents all the time, some of which are never used, if LG was to start pumping out these devices it will certainly be interesting to see what they can do with them.

LG have certainly come along way from their goldstar days.