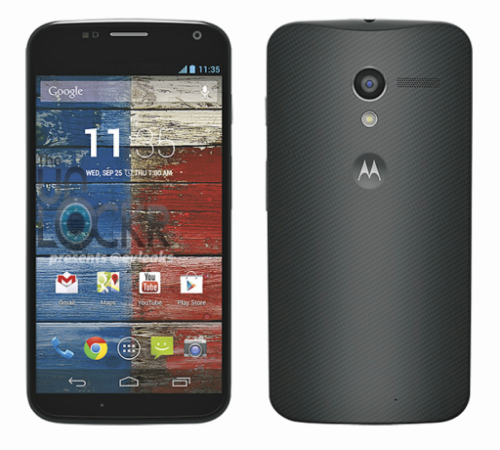 Way back in March we had a source at Motorola inform us that Motorola would not be bringing one of the most anticipated phones ever to Australian shores, after Telstra passed on it. Since then the rumour mill for the Moto X has run rampant with speculation, rumours, and leaks raising the profile of the first Google influenced phone from Motorola. It seems however that Telstra has re-thought their position on the handset, Channelnews is reporting that Telstra are in the middle of testing this device for a possible late August/early September release.

With regards to the Moto X, Telstra executives have been heard saying that it is a breakthrough device’. As well as through Telstra stores, the phone would be made available through Telstra dealer JB Hifi stores.

At this stage the likely cost of the Moto has been reported by PhoneArena as being available off contract for US $299 for the 16GB version and US $349 for the 32GB version. What these prices would be when or indeed if the phone reaches our stores would be anyones guess, the possibility of it being sold through Google Play against the Nexus 4 is a possibility if sold at comparable pricing.

Will you now be getting a Moto X if it is released no doubt with Australian LTE bands?  What is your cutoff price before you wait that little bit longer to see what else is around the corner?

I really really really wanted one. Would have even gone to Telstra for it despite their high price and service flaws. I think I’m just going to stick with my provider and get an S4

Mobicity is on crack, $870 odd for the 16GB white Moto X! I spoke to a guy in JB HIFI a while ago that said it would probably be released on Telstra first, perhaps by november, but by xmas it would be in JB unlocked.

I’m really interested in the Motorola X but not so interested in Telstra. Hopefully you’ll be able to buy it unlocked from somewhere else.

I want this outright but am wondering about the battery, is it going to be 2200 mah or the 4000 mah previously discussed. How about the the droid maxx?

Don’t care who it’s coming through, I just want it outright as quickly as possible.

it would have to be free with free calls for 12 months!

I don’t care when Telstra gets it.
When does Kogan/Mobicity get it?

Pricing has to be in line with the nexus 4, else I’ll just wait for the next nexus, which i think will likely be faster, and have a higher res screen.

It would be a shame if Telstra puts their boot animation and preloaded crapware onto a device that is made to be stock android with functional tweaks.

Agreed..what will be more disappointing though is if it launches after Android 4.3… and if this phone ships with 4.2.. which it looks like it may.

yeah that would be the biggest fail.. Getting the feeling this isn’t targeted at the ‘nexus’ army though.

yeah and i get that… but I think people want a google play edition device.

If this is simply another motorola device I don’t see what makes this any more desirable than a HTC One mini / S4 mini.

The fact you are comparing it to the minis proves the point, this phone punches well above that weight division in terms of speed & battery life. & I would go for the Dev edition which is in the pipeline

All i want is a google play edition device with LTE.. be it, nexus, HTC
one, S4.. whatever. Just please give me a 4g device with updates direct
from Google.
If the moto x does it, I’ll happily buy this “mid-range” device.

Telstra didn’t put anything on the Razr HD except their single app. No boot animations or anything. I’ll be surprised if this is any different.

Interesting. A friend got an SGS4 from telstra, and asked me to remove the bloat. i did, but I seriously couldn’t believe how much crap they put on it. It was literally an expensive telstra add that lives in your pocket.

All i want is a google play edition device with LTE.. be it, nexus, HTC one, S4.. whatever. Just please give me a 4g device with updates direct from Google.
If the moto x does it, I’ll happily buy this “mid-range” device.