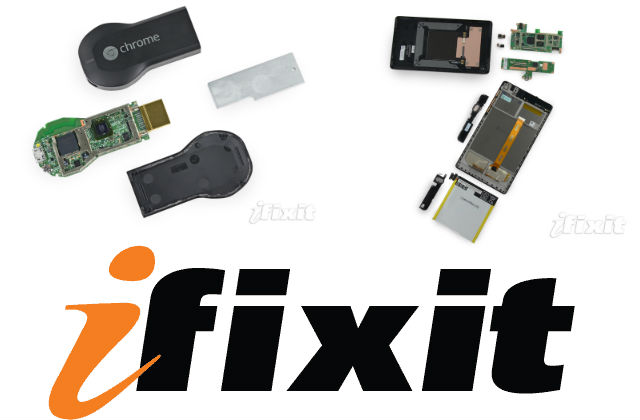 Those masters of all things breakable…and repairable – ifixit – have done their duty and torn down the two newest products on the market from Google this week the Chromecast and the Nexus 7 (2013). Both devices have cases which appear to be very easy to get into, but they are quite different on the inside as you’ll see.

First up the Chromecast. As a fairly basic device with no LCD or moving parts, it would be expected that the Chromecast would be an easy device to pull apart and it turns out it is, with no screws or other removable fasteners holding the Chromecast together, all that is required is a plastic opening tool that prys the plastic casing into two separate pieces.

From there the mainboard slips out and the device is laid bare. Inside the device, apart from a massive heatsink, you’ll find some basic electronivs which include :

After the full teardown, the team at ifixit have advised that due to the price and limited scope they would not assign a repairability score to the Chromecast and at US $35 it’s easy to see why.

Next, the Nexus 7 (2013). The actual specs of the Nexus 7 are already known, so there are no surprises really inside the device but it’s still quite interesting to see the device laid bare. To open the Nexus 7 you’ll need a slightly larger repetoire of tools than the Chromecast, you’ll be looking at needing a Phillips #0 screwdriver, some plastic opening tools to pry apart the casing and a ‘spudger’ – The official “black stick” that Apple Certified Technicians use to repair Apple computers.

The Nexus 7 is fairly easy to open apparently with a prying tool all that was typically needed to start, be warned the ifixit team did put a small crack in the rear case just opening the device.

Inside, ifixit found the Inductive charging coil and NFC module nestled together on the backplate. The battery comes out fairly easily and when unscrewed the boards underneath are free and clear. Camera modules are removed as one separate piece and the mainboard is revealed as being jam packed with electronics.

Overall, the new Nexus 7 got a repairability score of 7 out of 10, the same score given to its predecessor. The only real dark spot for the new Nexus 7 was the screen, they advise a heat gun will be needed to separate the front glass from the LCD or you could just replace the whole panel.

I quite enjoy these tear downs and the repair guides that ifixit provide are invaluable to those needing to repair parts that break down on their devices. My only issue is that I tend to want to purchase all the tools on their site every time I visit.

Any surprises you can see in either breakdown?