Home Tablets, Laptops and Chrome Nexus 7 (2013) up for pre-order from Mobicity The hottest tablet to get at the moment is the new Nexus 7 (2013) from Asus and Google, but with a retail launch looking to be in Early September and no word from Google on when it will launch on the Play Store, Australians are understandably looking elsewhere and Mobicity have just put up their pre-order site for both the 16GB and 32GB version.

There is no word on the LTE model, however I’m pretty sure that Mobicity will be waiting on the release of the European version of the LTE Nexus 7 (2013) before making any decisions on whether to offer it or not. Keep your eyes out, we’ll update if Mobicity begin offering that model.

If you want a Nexus 7 (2013) this far out from the official Australian launch, then you can certainly check out Mobicity to place a pre-order. Pricing is a little on the high side, but Mobicity offer their own local warranty to alay concerns over importing. Asus does have international warranty for the Nexus 7, at least according to their support website for those looking to import via other methods.

UPDATE: Mobicity has advised that the new Nexus 7 (2013) in both 16GB/32GB capacities are due to arrive in their warehouse tomorrow. 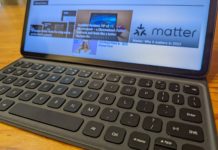 Went with the Sammy Tab 3 8″ as it supports MHL and microSD card. It’s cheaper than MobiCity Nexus7 at 350bucks.

Ridiculous pricing! I ordered it from amazon using a us address assigned to me by a forwarding company and am having it delivered from them by fedex priority – total cost for a 16G Wiifi = 300 AUD with all shipping costs.

Yup… or another alternative is BHPhotoVideo.com they ship without having to use a forwarder… came to $300 AUD as well..

It seems we can’t buy from play store for a while..

the main reason for nexus 7 high demand was its affordable price, with this price i would better off get ipad which doesn’t have any screen leak and is of premium quality

Haha good luck. No way at those stupid prices.

This is just Mobicity price-gouging on an yet-to-be-released-locally product. I mean, more power to them, but this is no different from people putting them up on the play store for $1000 hoping someone will be desperate enough to bite.

Well, hopefully the Play edition won’t be that expensive, and they won’t get away with a price gouge like that for too much longer :S

More than 50% markup from the US price for an unknown delivery date is a wee bit too much for me.

The cost isn’t actually $220, you have to add tax on top, because tax isn’t included.

Thanks, so a bit less than a 50% markup. Still seems way too much to me. I’ll wait for Google’s AU pricing.