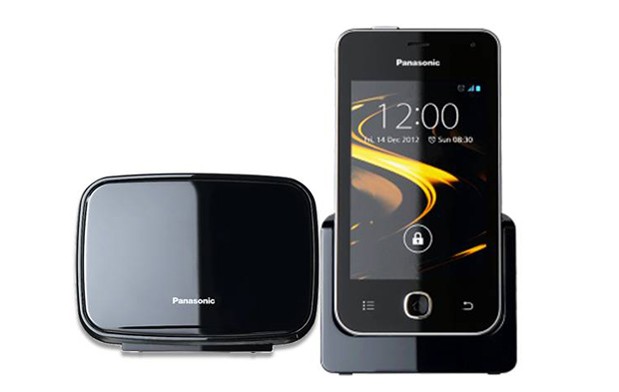 In a slightly surprising turn of events, Panasonic has announced a new Android device – its first ever cordless landline home phone powered by Android.

The Panasonic KX-PRX120 – as its formally known – consists of a base station and a handset with the followings specs:

The device can function as an answering machine and store up to 40 minutes of recordings. Additional handsets can be registered with the base station (which can support up to 6 devices).

It’s running an old version of Android (Ice Cream Sandwich) but it’s a little bit less important to have the latest and greatest Android OS on your home phone.

As Android devices go, it’s a pretty low end handset but despite that fact, it’s nice to see another Android landline home phone solution to take on the Telstra T-Hub 2.

We’re yet to hear about local availability, but pricing in the USA and UK is tipped to be $259 / £169, with a launch before the end of November.

Are you interested in an Android-powered home phone? Let us know in the comments!

It’s a good idea. Why shouldn’t landline phones have Bluetooth, contacts etc just like mobile phones. The price is a bit exy though. I certainly wouldn’t pay that much for a single handset home phone.

What I really would have liked to see would be a PSTN to WiFi device that would allow me to take my house calls directly onto our mobiles. I have no need for an out of date Android device on poor hardware that I will practically never use…

I believe the Uniden XDECT R003BT basically gives you this functionality.

A solution to home calls on your mobile would be a Fritz Box router. Possibly the best router device in the universe! A small app on my Android device allows 2 way calls from PSTN or VoIP linked to the Fritz Box. Very easy to setup and use, which is the best part!

Despite what people say about the home phone market its still alive and kicking and there are also alot of people using gsm/3g gateways also with a pstn device connected to it. Its about time someone else out there got something to float. Eager to see it.