Whilst Apple may have captured the early buzz with the tablet market when they introduced the original iPad, it seems their share of the tablet market has begun to fade according to research released by Canalys.

With a tablets now accounting for 31% of worldwide PC shipments, Canalys estimate that 68 per cent of tablets shipped in the second quarter had a screen size smaller than 9 inches and that small tablet manufactures like Samsung, Amazon, Lenovo, Acer and others saw hefty year-on-year gains in shipments during the second quarter, ranging from 228 per cent (Acer) to 317 per cent (Lenovo).

The basis of the report from Canalys is displayed in this table: 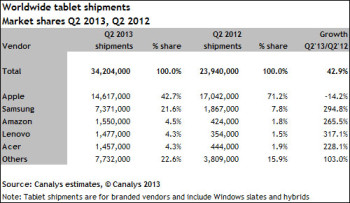 The report states that Apples share of the overall tablet market dropped by 14 percent year over year, leading to suggestions that Apples domination of the tablet market is, if not over, then well and truly on the decline. This could be attributed to the lack of recent refreshes to their iPad line, as noted by James Wang from Canalys, who stated that:

Apple’s decline in shipments and share has been partly attributed to its ageing portfolio. when Apple does decide to refresh its iPad … it will not experience the buzz of previous launches.

Mr Wang also notes that even a refresh of their iPad line may not have as big an impact as it has previously with many consumers tending to vote with their wallets preferring the smaller screened and cheaper Android tablets.

Canalys did have this to say about Apple profitability versus the rest of the pack:

While it is true that Apple is losing its stranglehold on the tablet market in terms of volume, it will remain its most profitable vendor for years to come

Samsung which has the largest share of the tablet market within the Android ecosphere, saw shipments jump 295 per cent which makes it the second-largest share with 1.867 million units shipped in the 2nd quarter.

Androids Tablet app eco-system, or lack thereof is somewhat contributing to the slower pickup of Android tablets, however recent focus by Google on Tablet specific Apps is slowly increasing availability of apps as noted by senior Canalys analyst, Tim Shepherd :

Despite its 53 per cent share, Android still lags far behind iOS in the availability of fully optimised tablet apps, and tablet app downloads from the Apple App Store dwarf those from Google Play. But Android is expected to continue to close the ecosystem lead iOS has in tablets, and increase share in coming quarters. Developers can and will quickly switch their priorities as different opportunities evolve and improve.

The tablet market has been heavily dominated by Apple, and with good reason so far. The tablet apps offered on iOS has been far superior to that offered by Android developers who have seen no substantial reason to update their apps for larger screen devices, until now. Increases in Android Tablet sales as demonstrated by this reports means that developers have a lot more reason to update their apps along with more users who are now requesting tablet versions of their apps.

So what do you think about this report and the numbers? What is your preferred tablet size 7″, 10″ or something larger or inbetween?

I could be wrong, but I think last year’s ipad launched in Q2, but this year the cycles are different due to Ice Cream Sandwich – er I mean IOS 7. Thus a year on year quarterly analysis will show up poorly.

My Iconia has just died (second time in two years), I won’t be buying another ACER, like the Galaxy Note 8″. The Nexus ten is amazing display wise, but no extra storage is a game loser for me.