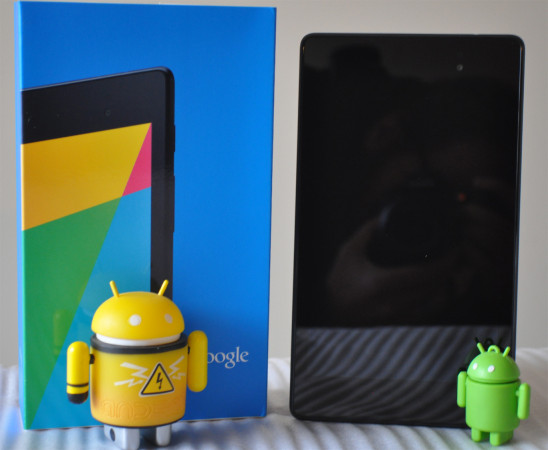 When Google announced the new Nexus 7 on July 24, I knew I was going to buy one. Heck, I buy every Nexus – even the ill fated Nexus Q. I feel this allows me to compare the original and the new version properly.

Google has unfortunately staggered the rollout of the 2013 Nexus 7. We still don’t know exactly when the 2013 Nexus 7 will go on sale here in Australia, but indications from retailers are that it will be either late August or early September. Google has remained silent when asked for a launch date on Google Play, so I imported mine from B&H PhotoVideo and received it early Tuesday morning.

The unit downloaded a couple of updates as soon as you turn it on. I’ve unlocked the bootloader and gained root access, but apart from that it’s stock Android 4.3 (Build JSS15J).

The hardware specs are pretty well known: a 1.5 GHz Snapdragon S4 Pro with 2GB of RAM. I went for the 32 GB version on mine, as Google’s typical lack of microSD card support proved to be a problem on the original 16 GB Nexus 7. There’s front and rear cameras on the tablet – a nice addition, but I don’t intend to start using it as a camera. That being said, the 5MP rear camera can take a few decent shots.

The screen is covered by a non-specific glass from Corning. It’s not the branded Gorilla Glass we’re used to seeing, so just how tough it is remains to be seen. I don’t want to test that aspect of the build quality, though.

It’s going to take a pretty big effort to beat the screen on the 2013 Nexus 7 – it’s gorgeous, with the 1920×1200 resolution fitting 2.3 million pixels at 323ppi. Just playing Prince of Persia and Transformers: Dark of the Moon shows that even Buzz may want to take a look at this screen.

While the screen takes up most of the tablet’s front face, the rest is bezel. The side bezels have been trimmed down a fair bit from the original – it’s actually about 0.5cm thinner – and it’s now very easy to hold in portrait. The top and bottom bezel though, have actually been extended – almost to the point of over-extension. The tablet is 2mm taller, and this time around is clearly designed to consume media – specifically video – in landscape, so the extra bezel seems a little ridiculous.

Gone is the faux-leather back from the original device, in its place a sort of matte non-rubbery version of the material used on last year’s Nexus 10. It’s just as easy to grip, but that could also be due to the thin profile of the device. The tablet is about 2mm thinner and noticeably lighter, yet Google’s claimed battery life is actually longer.

The new Nexus 7 also brings stereo audio – a speaker located is at each end of the unit, but on the back. The front-mounted speakers of the Nexus 10 have spoiled me, and a lot of readers are likely to be disappointed by the non-BoomSound nature of the audio, but the solution works surprisingly well. Google has released a demo video to demonstrate the built-in surround sound, so when you get your own device you should give it a whirl:

The Micro USB port is still what Jason and a fair few others refer to as “upside down” position. The buttons for power and volume up/down are still located on the upper right hand side of the unit – last year, this allowed for the tablet to dock using the pogo pins on the left hand side, but the 2013 model disappointingly lacks the pogo pins, which could signal that a dock isn’t on the cards for this year’s model. The headphone jack has moved from the bottom to the top of the unit – time will tell whether this is a good or bad thing.

One interesting thing I found that no-one seems to have mentioned so far is Miracast support. I found the setting for Wireless Display, turned it on and it picked up my Netgear PTV3000 – I was screen mirroring in no time.

The device is pretty quick. There’s no lag, even with 160 apps now installed. It’s all working really nicely – tap an app, and it opens instantly. The Google Play widget is again front and centre on your default homescreen, but this year there’s no bonus content to be found.

Apart from the two updates received when you first turn on the device, there’s nothing more to do except update all the default system Apps that come installed on Android 4.3 – which now includes Google Keep – through Google Play. Install a few apps or games, or download a HD movie from Google Play, but make sure you try out the marvellous screen and go from there.

Overall, the Nexus 7 has so far struck me as a really nice update. I’ve been using the Nexus 10 as my main tablet since it arrived, so I had to pry the original Nexus 7 from my wife’s grasp to do many of the comparisons, but it’s been worth it and highlights exactly what Google has done to improve on the tablet (she’s now looking longingly at the new one).

Geoff will be receiving his Nexus 7 in the coming days and will deliver his verdict in a full review as soon as he can. Until then, feel free to tweet me or hit me up on Google+ with any questions you may have.

Hi There – great review and I am keen to get one; question if I could: I am travellign at years’ end, and saw this article on CNET “How to transfer files from an SD card onto a Nexus 7”. do you think this will be possible on the new version…?

Want one so bad …can’t wait to jb gets it :)…very clean and easy to read review …keep it up 🙂