Gartner have just released a report comparing sales figures for mobile phones, the report shows that for the first time since their inception Smartphones actually outsold feature phones.

Worldwide, mobile phone sales grew 3.6 percent year over year, totalling 435 million units sold in Second Quarter of 2013. 225 million of those units were Smartphones, showing that sales were up 46.5 percent from Q2, 2012 and 210 million units of those were feature phones, a decline of 21 percent over the same period.

Samsung has retained their position as the top manufacturer in terms of unit sales, with Apple in second place. LG is in third position followed by Lenovo in fourth and ZTE in fifth position:

In regards to the overall leadership in the OS ecosystem by sales and total user base, there are no surprises, Android sits atop the Smartphone market with 79% of the market and iOS in second place with 14.2% market share. The most interesting part of the worldwide market share is actually the third place stakes which show Microsoft has overtaken BlackBerry. Surprisingly, retired mobile Operating Systems Bada and Symbian are still on the radar in fifth and sixth positions, although their market share has declined sharply.

In regards to mobile phone vendor perspective, the report does continue to state that Samsung remained in the number one overall position in the overall mobile phone market, with sales to end users growing 19 percent in the second quarter of 2013, whilst Lenovo sales reached 11 million units in the second quarter of 2013 which was mainly bolstered by smartphone sales. 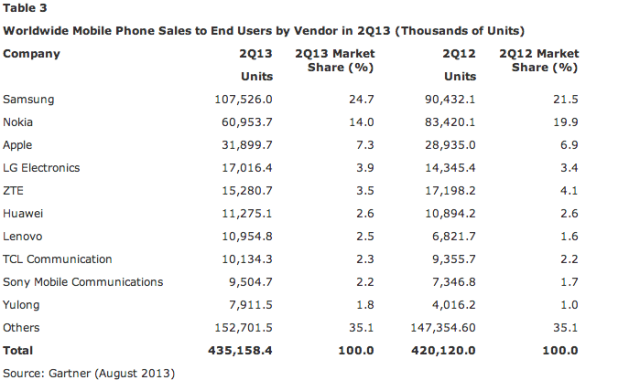 Anshul Gupta, principal research analyst at Gartner closes the report, stating that “With second quarter of 2013 sales broadly on track, we see little need to adjust our expectations for worldwide mobile phone sales forecast to total 1.82 billion units this year. Flagship devices brought to market in time for the holidays, and the continued price reduction of smartphones will drive consumer adoption in the second half of the year”.

No matter which manufacturer makes your phone, this is a lot of mobile phones in the market place and with 7 Billion people on the planet, we’re still a long way away from seeing a smart phone in each of their hands. The so called ‘Next Billion’ customers are the big target for all tiers of mobile manufacturers and that is a fair way in the future, as always it will be interesting to see the results for next year.