It seems that Sony is becoming a hot topic recently mainly around it’s cameras and camera accessories, including the news we posted recently about Sony’s Xperia Len’s G Series of attachments which clip on to your existing smartphone.

According to Android Community in a post over the weekend, the user manuals for both the QX10 and QX100 camera attachments have leaked onto the web and have provided some more insight into the devices and how they work.

The manual shows both models and for the most part they look like they will have similar features – both models will have a power button, microphone, zoom lever and shutter button. The clip on camera attachments also seem to come with a belt hook, tripod attachment, multifunctional jack and reset button along with a display panel. 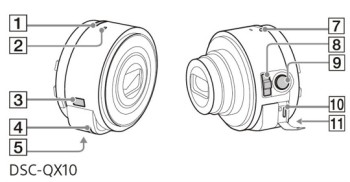 It is said that the display panel will have indicators for when memory card is not inserted but also, for when the battery is running low. The indicator lights, which form part of the devices, flash either green, orange and red to indicate when the power is on or off, when it’s in charging mode or when the device is running video.

It does seem the Lens G will have a rechargeable battery, but no indications on what size battery or what life can be expected per charge. 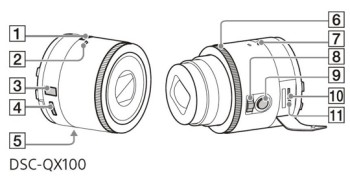 Looking at what differences the QX10 and QX100 Lens G devices have, it seems the QX100 is the only lens to feature ring control.

Of course based on this leak and the previous leaks and rumours, it does seem the QX100 has already been pegged as the higher-end model of the two camera lens. The manual also lists the QX10 as weighing 105 grams with the QX100 weighing in at 179 grams.

At this stage it is important to note, that there has been no official comment or word about if and when the camera lenses will be released or heading down our way, but rest assured we are waiting to see when Sony will release these camera lens accessories so we can try them out.

Would you still consider buying one to attach to your smartphone?

This is very interesting. If this can turn your phone into a top notch camera, with similar performance to mirrorless systems such as the $1000 Sony Alpha Nex-6/7, FujiFilm X-Pro 1, Panasonic Lumix G5, Olympus OMD-M5 etc… then I’m in.

But the price has to be right (about $500 for the QX100), and the performance must match the other cameras that I mentioned.

If the price is too close to a real micro 4/3 camera, then people would just opt for the benefits of having a dedicated camera.