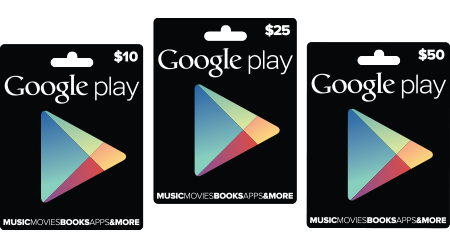 After yesterday receiving a tip that Google Play Gift Cards would be going on-sale on Monday, Ausdroid has spoken with Woolworths directly about the Gift Cards and received confirmation.

With regards to selling the gift cards, Woolworths advised :

Customers at Woolworths and BIG W are looking for us to deliver great prices and convenience across all the things they use the most – and increasingly that includes digital media.

With Australians using more phones enabled with Android than any other operating system, being the first to sell the Google Play gift cards gives BIG W’s and Woolies’ customers an easy and simple way to access the many thousands of apps, magazines, books and music titles available.

We’re anticipating Google Play gift cards will be a big seller in the next few weeks reflecting both the increasing popularity of gift cards and the fact they make an ideal choice for Father’s Day.

We’ve been checking with Woolworths stores around the country and it appears that some stores do actually have stock, however they are not actually selling them as yet. If you’re lucky enough to find a store that has begun selling them early we’d love to hear about it.

Side/wishful thought. Wasn’t the 26th of August about the date that peeps thought the Nexus 7 (2013) would be released in Australia?
Just saying!

Side/wishful thought. Wasn’t the 26th of August about the date that peeps thought the Nexus 7 (2013) would be released in Australia?
Just saying!

Yippee. About time. Unlike others, I don’t care who sells them so long as we can buy them.

Screw Woolworths AND Coles, Props to Google for making this available in a market that is almost insignificant to them, BUT Woolworths and Coles on the other hand …….. well………. I’m sure they only have their customers needs and wants in mind????????

How about coles? I heavily use flybuys

About time! I can’t wait to get one. I hate connecting my credit card to websites, so this should make buying things from Play a breeze.

Dang. I just spend $35 on the play store. Could have gotten these with my employee discount card!