The latest update to Google keep is rolling out some new pieces of functionality to their note taking app – reminders and multi-account support. 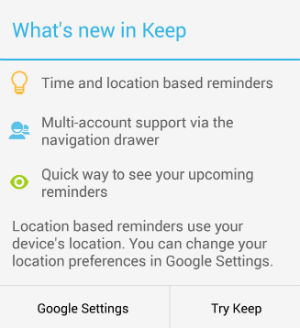 While you’ve had the ability to make to-do lists in Google Keep since its inception, there has been a lack of prompting to actually do something about some of those lists until now. The latest update which is rolling out through Google Play adds a reminder function that can be set as a either a time based reminder at either a general or specific time and date or as a location based reminder, the location based reminders are easily set with Google automatically suggesting nearby locations as you begin typing. The reminders popup as notifications and you can dismiss them or snooze them as you see fit. All in all a pretty good update, but they’re not done.

Google has added the ability to change accounts quickly from a slideout Navigation drawer. You can also add photos from your gallery to your existing notes.

The update is rolling out gradually through Google Play, so keep calm and you’ll receive a notification to update shortly.

My number one enhancement is to be able to share notes and lists ala Google docs. Shared shopping lists anyone?

My number one enhancement is to be able to share notes and lists ala Google docs. Shared shopping lists anyone?

Next step will be tag and group. Then I can get rid of wunderlist.

Next step will be tag and group. Then I can get rid of wunderlist.