Home Mobiles Will the Xperia Z1 ‘Honami’ be both waterproof and colourful? The Xperia ‘Honami’ or as it may be called the Z1 when it’s officially announced as expected just prior to the IFA conference in Germany, has been teased again for a second time in two days by the Sony Xperia Twitter feed.

The latest official teaser, shows up just a day after we were shown the first real look at of all things, the power button. This time being shown that the phone, as with most of the Xperia Z stable of devices, will be waterproof :
https://twitter.com/sonyxperia/status/370818955386290176

It’s a fairly limited look at the phone, but XperiaBlog have something a little better, in the form of a purported leaked render of the device. Shown off in White, Black and Purple colour variations, which we saw previously in a low resolution leak from Chinese site eprice. 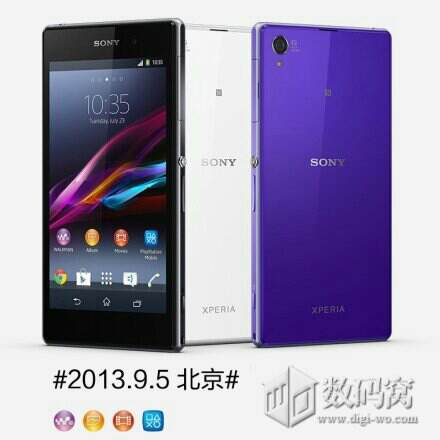 The numbers underneath would seemingly indicate either an announcement or launch on the 5th of September, co-inciding nicely with that IFA press conference.

With two leaks in two days, will Sony release a new teaser every day until the launch?