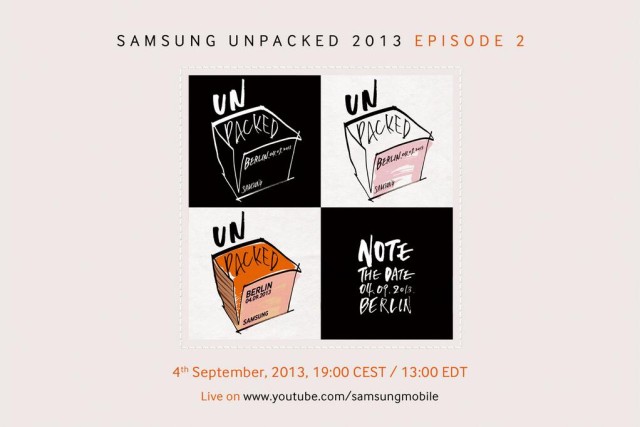 Samsungs pre-IFA press event on September 4th will see at least two product releases accroding to Lee Young-hee, executive vice president of Samsung’s mobile business, who has advised the Korea times that the Galaxy Gear Smartwatch and Galaxy Note 3 will indeed be launched at the event.

Despite the existence of the Sony SmartWatch 2 and various Kickstarter launched Smartwatches like the Pebble, it’s the Galaxy Gear that has really fired imaginations of people interested in wearable computing.

According to Lee Young-hee the watch has been in development for some time and Samsung has high hopes for the device, but contrary to some rumours will not feature a flexible display although future wearable devices could incorporate this technology :

The Gear won’t have a flexible display. The new device will enhance and enrich the current smart mobile experience in many ways. It will lead a new trend in smart mobile communications. We are confident that the Gear will add meaningful momentum to the mobile industry.

The Note 3, also confirmed for launch at the event will see new enhancement to key features as well :

Samsung opened a new smart mobile device category back in 2011 with the introduction of the first Galaxy Note. Since then, smartphones with large screens have been a mainstream trend. As the creator of this category, we will introduce our customers to enhanced key features on our Galaxy Note devices.

As an aside, Lee also advised that Samsung is definitely not considering purchasing Blackberry despite rumours to the contrary.

On the services front, they are looking into enhancing their emerging security protocols. Knox which was launched with the Galaxy S4 has already been adopted by the US Defence Department and Samsung would like to continue work in this area.

Despite not having worn a watch for 20 years, I`m still intrigued by Smartwatches, but I’m not totally sure what I want out of one as yet, it will be interesting to see what the Galaxy Gear will offer. Note afficianados will also be keen to check out exactly what is new or enhanced in the new Note 3 and we’re always interested to see what other surprises Samsung can spring on us.

The Samsung Unpacked event will be live-streamed on the Samsung Mobile Youtube page at 7PM local time in Germany – 3am September 5th Australian Eastern Time.

What are you more interested in? Note 3 or Galaxy Gear?

Does anyone remember the delay from announcement to release for the Note 2 here in Australia? Assuming the Note 3 is announced on the 4th, when should we expect stock down here?

Bring on Note 3!
Daniel I love the way you put words to paper. Keep up the good work mate!

Ok, the watch has me very interested, having to walk with the aid of a stick causes all sorts of problems when trying to juggle calls, etc.