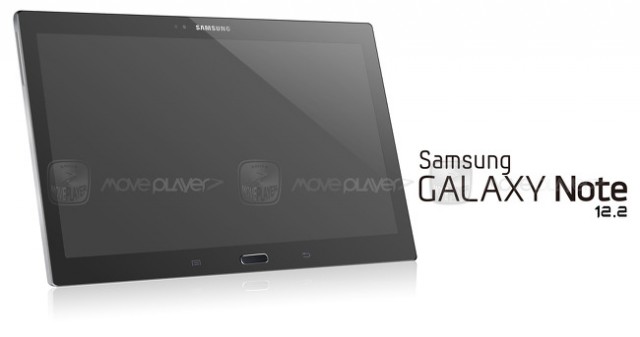 If a large screen, hi-res Samsung Galaxy Note is your idea of a dream come true, then this is apparently your first look at what your new tablet will look like, at least according to Korean site Moveplayer.net

The Samsung Galaxy Note 12.2 was first noted – by us at least – when notable twitter leak powerhouse @EVLeaks first mentioned a pair of hi-res tablets was being worked on by Samsung. The tablets SM-P600 and SM-P900 would be a pair of 10″ and 12.2″ sized tablets that would have a screen resolution of 2560×1600 with the SM-P900 carrying S-Pen support. User Agent Profiles(UAProf) for both devices are available on the Samsung Mobile website, which confirm the leaked 2560×1600 resolution for both tablets. The SM-P900 is rumoured to come bearing a Samsung designed Exynos 5 Octa CPU, while the smaller 10″ tablet will come with a Snapdragon 800.

That physical home button continues to persist, it’s certainly part of the Samsung design language now. What doesn’t seem to be part of the default Galaxy or even Samsung design language is the more squared off design that seems to have hit the corners of the device, this could be a move to distance their new range of Note tablets from the Galaxy Tab series which was recently launched.

While it’s nothing more than a low-res render – and not even an official one at that – the device doesn’t seem to have all the front mounted sensors that have been packed into the Galaxy S4, so perhaps we won’t see things like the ‘Air View’ function that was launched on that device.

It’s definitely time for a refresh of the larger sized Samsung Galaxy Note – the Galaxy Note 10.1″ was launched in the US over a year ago now – so it would not come as a surprise to see the Note 12.2 launched at the Samsung Unpacked Episode 2 event at IFA this week alongside a Galaxy Note 3 and Galaxy Gear smartwatch.

Hanging out for a high-res Galaxy Note tablet?

I don’t think the button on such a big tablet is a good idea but at the same time the default on screen buttons in landscape mode does take up ALOT of space.
Big screen + no on screen buttons = lots of space for web surfing, photos, apps, games, etc.
Pinball arcade should look great on this tablet!!!

Where are the front facing speakers ???