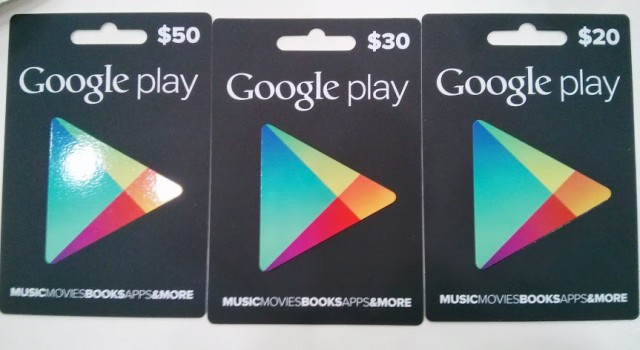 The introduction of Google Play Gift Cards into Australia has been fairly quiet so far, but a memo that was photographed and sent to Ausdroid by Alexei shows that Woolworths definitely sees massive potential in the sale of Google Play gift cards in Australia.

The memo, which sees Woolworths acknowledge that Android devices currently hold the largest market share of phones in Australia at 60% of the market, shows that Google Play Gift Cards have the potential to drive more sales than iTunes cards, most likely one of the driving reasons for them capturing an exclusivity arrangement that will last until the end of 2013.

While there’s no discounts in-store for customers, Woolworths stores have been offered incentives by Google Play to push the cards. Google Play are apparently offering one store in each state the opportunity to win prizes based on the highest amount of sell through. Prizes on offer are :

It is interesting to note that the 32GB Wi-Fi Nexus 7 appears to be a 2012 model rather than a current gen 2013 model – way to clean out the inventory stockpile Google Play. But still, a Nexus 7 is a Nexus 7.

Catalogues for both Big W and Woolworths which are being delivered to homes across Australia right now, have no incentives for purchase, merely introducing the Gift Cards to their customers, something that is extremely important to Google and partners with the intention to expand awareness of Google Play as an online market place as well as attract customers over to Android as a platform.

Some interesting things to note from both these advertisements :
Firstly, both the advertisements have advised there are only 675,000(Big W) and 750,000(Woolworths) Apps available in Google Play – there are actually over 1 Million now.

Secondly, and most importantly, the Big W catalogue advises that TV Shows are available for download through Google Play…an honest mistake by an over-zealous marketing team not checking properly or a sign of an imminent launch of TV Shows in Australia? The Google Play digital International availability of digital content page, still lists the UK and USA as the only two countries with access to TV Shows, with the UK receiving access to Google Play TV Shows only at the beginning of last month.

We’ve approached Google for clarification on the sale of TV Shows for Australia through Google Play and we hope for good news, we’ll certainly let you know what happens.

Seven-Eleven? They’re also available there, otherwise it’s a bit difficult as they don’t sell them online yet. Woolworths had an exclusive till the end of 2013 but we haven’t heard of it expanding to other retailers…yet 😉 we’re watching.

No Seven-Eleven either.
I guess they don’t want everyone to buy them in the country area. LOL

Yeah, I thought with no access to BigW/Woolworths that a Seven-Eleven would be a stretch.

Actually purchasing a physical card is an issue and I’m assuming you either don’t have or don’t want to use a credit card to purchase credit otherwise – these guys can sell them : http://www.idroid.net.au/Google-Play-Credit-Voucher

Availability: Out Of Stock

Ah man I certainly hope we get TV shows, if that’s the case then hello GoT Season 4! 🙂

can you use for hardware purchases eg Nexus 4?

No, you can’t unfortunately.